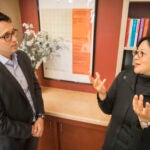 The findings follow past studies showing that the brains of some criminals exhibit abnormalities, but in most cases without determining a clear association between the injury and the behavior. The new study is published in the Proceedings of the National Academy of Sciences.

“Our lab has developed a new technique for understanding neuropsychiatric symptoms based on focal brain lesions and a wiring diagram of the human brain,” said senior author Michael Fox, an assistant professor of neurology at Harvard Medical School and the associate director of the Deep Brain Stimulation Program at Beth Israel Deaconess Medical Center. “We’ve successfully applied this technique to hallucinations, delusions, involuntary movements, and coma — and in perhaps its most interesting application to date, we applied it to criminality.”

Perhaps the most famous case in decades of interest on possible links between brain injury and criminal behavior is that of Charles Whitman, who was found to have a brain tumor after killing 14 people in the Texas Tower massacre of 1966.

First author Richard Darby, formerly of BIDMC and now an assistant professor of neurology at Vanderbilt University, noted that he personally became interested in how neurological diseases might cause criminal behavior after caring for patients with frontotemporal dementia, who often commit nonviolent crimes as a result of the condition.

To investigate the issue, Fox, Darby, and their colleagues systematically mapped brain lesions in 17 patients who exhibited criminal behavior after — but not before — the lesions appeared. Analyses revealed that the lesions were located in diverse brain regions, but all mapped to a common network.

“We found that this network was involved in moral decision-making in normal people, perhaps giving a reason for why brain lesions in these locations would make patients more likely to behave criminally,” said Darby. The network is not involved with cognition control or empathy.

The findings were supported in tests of a separate group of 23 cases in which the timing between brain lesions and criminal behavior was implied but not definitive.

Researchers were quick to note that not all individuals with brain lesions in the network identified in the study will commit crimes. Genetic, environmental, and social factors are also likely to be important.

“We don’t yet know the predictive value of this approach,” said Fox. “For example, if a brain lesion falls outside our network, does that mean it has nothing to do with criminal behavior? Similarly, we don’t know the percentage of patients with lesions within our network who will commit crimes.”

Darby added that it is important to consider how the study’s findings should not be used.

“Our results can help to understand how brain dysfunction can contribute to criminal behavior, which may serve as an important step toward prevention or even treatment,” he said. “However, the presence of a brain lesion cannot tell us whether or not we should hold someone legally responsible for their behavior. This is ultimately a question society must answer.”

Indeed, doctors, neuroscientists, lawyers, and judges all struggle with criminal behavior when a brain lesion is present. Is the patient responsible? Should he or she be punished in the same way as people without a lesion? Is criminal behavior different than other symptoms suffered by patients after a brain lesion, such as paralysis or speech trouble?

“The results don’t answer these questions, but rather highlight their importance,” said Fox.