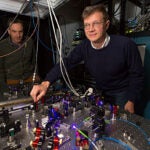 In July, New York magazine published its most-read article ever, surpassing a photo spread of Lindsay Lohan. The topic? Doom.

While defying the belief among author David Wallace-Wells’ editors that climate change would be “traffic kryptonite,” the story, titled “The Uninhabitable Earth,” presented an apocalyptic vision in which rising seas flood Miami and Bangladesh, heat and drought cut grain yields in half, diseases spread, and wars rage.

Unfortunately, that vision isn’t fiction, but rather Wallace-Wells’ summation of climate change’s little-discussed worst-case scenario for the year 2100.

“I think there’s real value in scaring people,” the journalist said Wednesday during a panel at the Geological Museum, sponsored by the Harvard University Center for the Environment.

The event, “Hope and Despair: Communicating an Uncertain Future,” explored whether doom and gloom are more effective than hope in spurring climate action. Panelists agreed that fear is a potentially powerful lever, but also insisted on the importance of covering success stories. Progress is an important motivator, keeping people from succumbing to despair in the face of bad news.

Wallace-Wells said he wrote the article because climate change discussion has centered on limiting global temperature rise to 2 degrees Celsius by 2100. While changes due to that level of warming would be bad enough, the projection, he said, is too often treated as a certainty rather than the middle value in a range that, at its high end, would unleash calamitous effects.

The discussion, moderated by Assistant Professor of Organismic and Evolutionary Biology Elizabeth Wolkovich, also featured Campbell Webb of the University of Alaska, who penned a 2005 article calling for hope in conservation biology despite discouraging developments. That hope, he wrote, was needed for the benefit of the biologists themselves even as it faded for the environments and organisms of their research.

Webb said during the panel that the article was a reflection of the grief he felt at the loss of Indonesian rainforests where he had worked. Today, he said, whether he feels optimistic or pessimistic depends on the day.

Panelist Nancy Knowlton, Sant Chair for Marine Science at the Smithsonian Institution, began an “ocean optimism” Twitter account over negative predictions for coral reefs. The feed, according to the account page, is aimed at “sharing solutions and creating a new narrative of hope for our ocean.” That optimism, she said, is fueled by success stories that are too often ignored.

Knowlton recalled a conference in Tampa Bay, Florida, where she asked how many in the audience of 200 knew about the restoration of nearby seagrass beds that had been wiped out by the 1960s. Four people raised their hands.

Panelist Nikhil Advani, who works with rural communities on behalf of the World Wildlife Fund, agreed with Knowlton on the importance of promoting successes, especially in the case of small-scale entrepreneurs who make a regional impact.

Wallace-Wells sees cause for optimism in the potential scale of disruption. That humans can drive negative effects, he said, also suggests their potential to be agents of positive change. The question is how to stoke that potential.

Knowlton said that different audiences demand different approaches. While some people can be motivated by fear of a dark future and others by hope, still others, like the Republican mayor of Georgetown, Texas, which is powered entirely by renewables, are moved by economic arguments.

While students have the energy and ideas to make a difference, they can also be discouraged by feelings of hopelessness. This group needs to be told not only of the problems we face, but also of strong foundations where they can build, Knowlton said.

“I’ve had many, many students come up to me after talks about optimism or the Earth optimism summit that we ran in Washington, saying, ‘You know, this was incredibly empowering. I now want to go out and work on solving this problem. I almost left the field of conservation because I thought there was nothing we could do.’”