Bringing out the edge in Austen’s wit 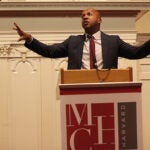 The need to talk about race

It seems timely in a year dominated by sexual harassment headlines that the American Repertory Theater is staging a production concerned with power dynamics between men and women, and that the adaptation of a beloved classic by a famous female novelist bears another woman’s touch.

The retelling of Jane Austen’s “Sense & Sensibility” was a hit with critics and audiences last year during its New York City run. Running through Jan. 14 at the A.R.T., the play has a fresh flair, with inventive staging and action inspired by actor-playwright Kate Hamill’s humor-heavy script. It was developed by Bedlam, a New York theater company known for reimagining classics.

“I feel like if you can make people laugh they actually listen better,” said Hamill, who filled the lead role of Marianne Dashwood in the original staging of “Sense & Sensibility.”

“That’s why ‘Hamlet’ is such a well-constructed piece, because there are parts of ‘Hamlet’ that are so funny, [and] that makes you appreciate the tragedy even more. For me, Austen is hilariously funny and the hypocrisy that she exposes is so funny. So I really try to highlight that.”

“I feel like if you can make people laugh they actually listen better.”
— Kate Hamill

The Bedlam vision breaks from highly romanticized Austen adaptations of recent years. The trend gained hold in the 1990s thanks largely to Hollywood, said Deidre Lynch, Ernest Bernbaum Professor of Literature. Lynch, who teaches “Jane Austen’s Fiction and Fans,” said that modern film adaptations represent a “torquing of the content of Austen’s novels that I think gives you only one part of what they mean.”

By contrast, Hamill highlights the “comic, satiric Austen, who is also really, really serious about questions of ethics and questions about gender and equity,” said Lynch.

As director of the show, Bedlam artistic director Eric Tucker worked closely with the playwright to accentuate Austen’s comedy.

“There’s so much wicked fun with these characters,” he said. “They are really just eccentric and Kate’s adaptation really focuses on some of the eccentricities.”

The humor is most concentrated among the gossips, a group of chattering meddlers whose whimsy and ridicule serve to push the story forward and highlight the social pressures of the times. Like many of Austen’s works, “Sense & Sensibility” examines the status of women without men. The author used her pen to shine a light on strict gender rules and poke fun at social constraints. So does Hamill.

“Both the men and women in this piece are trying to navigate those rules … and that’s how I created this device ‘the gossips,’” said Hamill. “I thought, it’s hard for a modern audience to really understand how judged these people felt, and how restricted, unless they can see them being judged and watched and talked about all the time.”

Raised in upstate New York by parents who wouldn’t let her watch TV, Hamill turned to books for entertainment. As a teen, she gravitated to Austen’s characters and wit. She acted in high school, studied theater in college, and moved to New York in 2005 with $400 and dreams of making it big. She succeeded in finding regular work, but remained frustrated by her lack of options.

“I felt like there was such a dearth of good female roles that were as complex and interesting as the male roles, and especially female-centric narratives in the classics,” she said. “I loved the classics so much, but so often as a woman you are playing these tertiary supporting roles in sort of the man’s journey.”

So she decided to write her own.

Hamill, who is planning to adapt all of Austen’s novels for the stage and is also working on a woman-focused retelling of Homer’s “Odyssey,” acknowledged that tinkering with classics can be tricky.

“Expectations are really high and sometimes [people] may feel like you are scribbling in crayon on their altars,” she said. “But all I can say is people have been very open-minded.”

Hamill is eager to find more of that open-mindedness on the production side of the business, where men still dominate.

“When a woman or a person of color or someone of a different orientation is constantly being taught that if they are in stories at all they are only tertiary — I think it has broader cultural ramifications,” she said. “That’s why it takes 30 women to bring down one Harvey Weinstein, because a woman’s story is just not as heavily weighted as a man’s.”