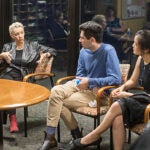 Learning from a legend (a.k.a. Dad)

Steven Kerns was a high school dropout, a self-described “rebel without a cause” from Long Beach, Calif., when he joined the U.S. Army as a teenager looking for adventure, with vague notions of changing the world. As soon as he deployed to Afghanistan and entered the war zone in May 2007, his romanticism was knocked out of him.

A soldier with the 173rd Airborne Brigade Combat Team — Kerns chose to become a paratrooper to overcome his fear of heights — he was assigned to the notoriously dangerous Kunar and Nuristan provinces. On Nov. 9, 2007, two squads out on foot patrol were caught in a vicious ambush and came under assault from rocket-propelled grenades and small-arms fire. Kerns’ base was also brutally attacked, forcing him and his fellow soldiers to fight for their lives.

When the attack on the base was finally repelled, Kerns and his comrades there were ordered to stay put; the risks of trying to help the squads under ambush were too high. “I knew my friends were being killed,” Kerns said. As he later wrote in his personal essay to Harvard Law School (HLS), “Their voices haunted our radios.”

Although Sgt. Kyle J. White received the Medal of Honor for saving lives during the ambush, five men from Chosen Company and a Marine adviser were killed. Chosen Company had spent more than a year together in Vicenza, Italy, so each death was a piercing loss, Kerns said. But the death of 23-year-old Cpl. Sean K.A. Langevin, whose wife was due to give birth to their daughter Zoe a few days later, had a huge impact on Kerns. It was the impetus for his journey into “post-traumatic growth,” he says.

“Although I’ve never met Zoe, this little girl has inspired me to do everything I can in my power to be a better person,” said Kerns, “so that one day when I do meet her, I can tell her, ‘I knew your dad, and he is a better man than me.’”

Over the following months, the base endured constant attacks. When Kerns finally left and landed at Bagram Air Base in relative safety, he felt a wave of unimaginable relief. But it was fleeting. Minutes later, he learned that nine men from 2nd Platoon in Chosen Company had been killed in the Battle of Wanat, often described as the deadliest battle in the war. “We lost nine guys just four days before we left for home,” including Kerns’ best friend from basic training, Cpl. Gunnar Zwilling. “I entered the deepest numb of my life. I was out of touch with my emotions for a long time,” Kerns said.

Kerns, a sergeant, fulfilled the rest of his military commitment at Fort Irwin National Training Center in California. Three days after leaving the Army, armed with newfound resolve, he started classes at Long Beach Community College, where he soared academically and began to put his quiet promise to Zoe into action. “Leading people toward a better world required me to trade in my rifle for books and replace the unfocused ambition of my youth for the dedication of my life,” he wrote in his HLS essay.

Kerns decided to spearhead an effort to build a memorial bench honoring Sgt. Israel Garcia, who had been killed at Wanat and who, like Kerns, had attended Long Beach Poly High School. Despite initial resistance from the school, Kerns organized a diverse group that included artists, musicians, government officials, and veterans to raise money to build the bench. “This experience allowed me to begin leaving the war behind me as I knew that I could lead people to positive change in our society,” he wrote.

After community college, Kerns enrolled at California State University in Long Beach, graduating magna cum laude with a degree in environmental science and policy, and receiving the Outstanding Graduate Award in his major. As an intern for a California congressman, Kerns assisted local veterans with their VA claims, and he also worked at the NASA Jet Propulsion Laboratory in Pasadena. As part of a National Science Foundation program, he designed and executed a six-week experiment in the Costa Rica rainforest, where the devastation of deforestation fueled his interest in environmental preservation. After college, he spent a year as an AmeriCorps CivicSpark Water Action Fellow in Chino Hills, Calif., where he helped design plans for storm water runoff and strategic drought resistance.

With an eye on a career in environmental law and policy, he was accepted to several very good law schools. But he was reluctant to apply to HLS — with an LSAT score of 163, he was sure he’d be rejected. His girlfriend insisted that he apply, and not long after an interview with the HLS admissions office, the former high school dropout got a phone call he had never expected. When he learned he’d been admitted the class of 2020, Kerns said, “I got this wave of relief. I knew I was one step closer to making good on that promise to Zoe.”

Having served among soldiers he considers heroes, including those who lost their lives, Kerns downplays his own military contribution.

“But I’m so happy to have been in that arena with those people. Just being part of that whole thing fundamentally changed my life. I think it’s true for so many of the Chosen soldiers I was with, that the platitudes you get told in basic [training, for a moment came true, and we lived what warrior culture espoused,” he said. “It imprints you, and I’m deeply grateful for that. We paid a heavy price, one that I wouldn’t wish on anyone, but knowing what I know now, I wouldn’t trade it for anything. You could offer me $1 billion to wipe my mind and I wouldn’t.”

Kerns said he’s come full cycle from youthful romanticism to its loss amid the horror of war to finding a new sense of purpose. “I replaced my teenaged idealism with the dedication of adult life,” he said.

Today, Kerns wants to focus on environmental law and its intersection with national security. “What’s the point of my friends sacrificing if we’re destroying the planet?” he said. “I have that desire to protect our country and make my friends’ sacrifice worth it.” Once he is a second-year, he also plans to do pro bono legal work for military veterans through the HLS Veterans Law and Disability Clinic.

Kerns said he’s met a few HLS students who have told him they’d never known a soldier, which confirms his belief that putting a human face on the military is something America needs right now.

“If you don’t have humanization of the military, then you get a bunch of policy decisions I don’t support,” he said. “If the blood of an American soldier is cheap in this country, then the blood of an Afghan is cheaper, and cheaper still is the blood of a person killed by a drone strike in-country that doesn’t make the news.

“When blood is cheap, then perpetual war is easy, and if that’s the case, then who or what are we serving for?”