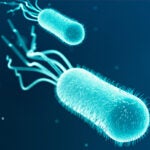 Over the next few months, millions of people will receive vaccinations in the hope of staving off the flu — and the fever, pain, and congestion that come with it.

But how can one injection trigger an immune response that protects someone from head to toe?

Part of the answer, says Nicolas Chevrier, a former Bauer Fellow at the Harvard FAS Center for Systems Biology and now an assistant professor in molecular engineering at the University of Chicago, appears to lie in the way antiviral signals spread through the body within hours of a vaccination, seeding immune cells in various tissues. Chevrier’s findings are described in an Oct. 5 paper published in Cell.

“The starting point for this study was the question of how do we study the immune system at the scale of the whole organism?” Chevrier said. “Immune cells are in every organ of the body — in the lungs, the heart, the skin — making it incredibly challenging to study how the immune system can operate across the entire organism. Current studies are siloed. For example, people only looked at the lungs or only looked at the blood.”

To find answers, Chevrier and colleagues turned to a pair of Vaccinia viruses — one a pathogenic version of the disease and the other an inactive strain deployed for formulating vaccines similar to those used to eradicate smallpox in the early 20th century.

“To test our idea, we wanted something to trigger and compare various types of immune responses from vaccination alone, to infection alone, and to a protective one [infection of vaccinated individuals],” he said. “Using this comparative approach allowed us to ask: When you immunize at the skin, does the response stay localized, or does it become systemic? And if so, how far and how fast does it spread? These are fundamental questions about the inner working of the immune system at a scale that we didn’t have any way to look at.”

Researchers first immunized mice against the disease to study how their immune systems responded to the vaccine, and later exposed the same mice to the pathogenic version of the virus to study how it triggered their immune defenses.

“We were very excited to see that our approach worked,” Chevrier said. “We could observe and track immune processes at the whole-body scale for the first time. Based on these findings, we uncovered two new mechanisms of immune protection critical for the host. First, we found that within hours of being vaccinated, a whole-body antiviral is created — as if the body’s defenses were anticipating its virus opponent’s next moves to win the battle.”

That process, he explained, involves a molecule known as interferon, which is secreted at the point of immunization, and quickly propagates through most tissues via the bloodstream.

For years, Chevrier said, scientists believed interferon was merely a local response to an immune trigger, but the new study suggests that it may actually play an important role in activating antiviral genes across many tissues, helping them fight off infection.

What Chevrier dubbed the protective response, on the contrary, seems far more localized to a few organs.

“It seems to be more restrained to where the virus goes,” he said. “In our tests, the infection came in through the lungs, and very quickly progressed to the liver and the spleen. But the immune defenses set by vaccination stopped the virus right there, and very efficiently. We found that memory cells are instructed to reside in those tissues and are set up to counter a potential reinfection.”

That finding contradicts accepted wisdom, which had been that those cells could most effectively fight infection by circulating through the body. In recent years, however, evidence has emerged suggesting that the resident cells might be more potent and widespread than first thought.

“They were seen as local protectors,” Chevrier said. “People thought that when you got immunized at the skin, for example, those cells would reside in the skin, but what we’ve found is that they’re seeded much more broadly across the body to serve as systemic protectors. So as soon as the virus arrives in the liver or the spleen, those cells are ideally placed to fight off the infection as it unfolds.”

He added: “Our study is a proof of principle that the immune system can be observed and studied at the whole-body scale in mammals — as opposed to one or few tissues at a time. That being said, much effort is now needed to test this idea in other immune processes linked to health and disease.”