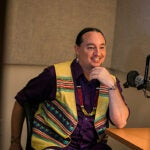 We speak, therefore we are

The floor-to-ceiling windows in Dan Byers’ office at the Carpenter Center for the Visual Arts (CCVA) give him a clear, ground-eye view of campus. It’s a perspective that fits nicely with the ambition of the new John R. and Barbara Robinson Family Director to connect the center to the wider Harvard community.

Byers, who came to the CCVA in June after serving as senior curator at the Institute of Contemporary Art in Boston, grew up knowing Harvard and Cambridge. His psychologist father ran the Office of Student Life Counseling at Harvard Law School, and his brother Tony is principal of Graham and Parks, the public elementary school on Linnaean Street.

The new director spoke with the Gazette about how he hopes to elevate the CCVA on campus and beyond, and the artists who will help him execute that plan.

GAZETTE:  Hopes and dreams: What are yours for the Carpenter Center?

BYERS: This remarkable building has always had exhibition spaces among studio and classroom spaces — the visual and conceptual relationship between art-making and its display is choreographed by the building’s design. That relationship forms an important foundation for the program and vision I’m developing.

We have multiple identities here. One is to be the contemporary art center for the University. To that end, we’d like to be almost a respiratory valve between Harvard and the outside world and between Harvard and worlds of contemporary art. This means developing an institution that engages our present moment — as well as history — through the eyes of artists. And it means putting artists and artworks in conversation with the vast cultural resources here. The field of contemporary art unfolds over multiple contemporaneous conversations, occurring in many parts of the world. I’m interested in bringing those international conversations, along with the kind of knowledge created by contemporary art — which can often be unresolved, multidisciplinary, and the product of autodidacts — into conversation with the high-level scholarship and expertise at the University.

My charge is also to expose students working in the studios here to the relationship between making and showing. There is a beautiful, almost cinematic moment in the Carpenter Center’s architecture where the ramp rises, finally bisecting the Sert Gallery on one side and the painting studio and wood shop on the other, depositing the visitor into the middle of the building. There’s a visual dialogue between spaces of learning and production and spaces of display. The studio is often an intimate and vulnerable place while the gallery is where art is made public. Art’s meaning and its life in the world are deeply influenced by the context of its exhibition and the public who experiences it. We’re putting together a Carpenter Center Student Advisory Committee to increase student involvement and create a structure for these experiences.

Since coming here, I’ve been thinking a lot about models. Who are the artist-models students should experience? I’d like to involve artists who can represent a range of ways of being an artist in the world — different models of making, models engaging culture, politics, and identity, and models of the artist’s role in society.

GAZETTE: This semester you have hosted more than a dozen artist talks. Can you talk about the role public programs play in the center’s mission?

BYERS: We’re not a museum or an institute. We are a center — a place where people connect, where different ideas and people come together. Temporary exhibitions and public programs are the way we make knowledge and build a social life around the institution. It is my goal, and soon to be part of our mission statement, to create community around contemporary art. Art and artistic communities flourish when there is constant infusion of new people and ideas into this community. We are free and open to the public — this, too, is vitally important to me. So our public programs, which have brought incredible artists like Charles Atlas, Howardena Pindell, Laurie Simmons, Jessi Reaves, and Basma Alsharif to campus, are just as important as our exhibitions.

To connect those artists further out into Harvard, I am also devising a program that would match three or four artists a year with a different library, collection, or archive around campus. While the Carpenter Center may not have a collection, we are surrounded at Harvard by some of the most interesting and expansive collections in the world.

GAZETTE: Where are you starting?

BYERS: We are collaborating with the List Visual Art Center at MIT to bring a survey exhibition of Tony Conrad (’64) to Cambridge. He was a math major at Harvard, and went on to work as an artist in experimental film, music, and a wide range of new media and technologies. MIT and Harvard provide the perfect backdrops for his work.

After that, my first show will be Liz Magor, an incredible sculptor who lives in Vancouver. I’m co-curating this exhibition with the director of the Renaissance Society at the University of Chicago, where the show will travel after here. Magor has not had a U.S. exhibition in 15 years, and despite major exhibitions in Europe and Canada, has never had an institutional solo show on the East Coast. Her work is deeply invested in the intertwining of the personal and political, as well as a commitment to physical sculptural intelligence derived from her process of intricately cast, lifelike objects. Liz is a good example of the kinds of shows I’d like us to do here; she taught for 15 years, and has already spent time with VES students. Her work beautifully demonstrates the unique ways art-making can illuminate complex, even contradictory politics, aspects of human nature, and the inchoate phenomena of our social and natural worlds.