To everything there is a season? It’s not as simple as that 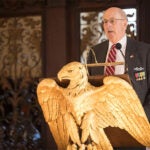 It’s impossible to miss when the seasons change. But do most people understand the science behind those changes? According to decades-old research by astronomers and educators at the Harvard-Smithsonian Center for Astrophysics (CfA), probably not.

Many people think seasons are caused by changing distance between the Earth and Sun, an idea that can be reinforced by misleading textbook diagrams. But that’s not the case.

To help set the record straight, CfA experts designed the ThinkSpace (Thinking Spatially about the Universe) program to address long-held misconceptions about the cycle of the seasons by focusing on spatial thinking. This fall, through a collaboration with Cambridge Public Schools (CPS), they’re letting local students in on the science.

“Astronomers make two-dimensional observations of three-dimensional processes all the time and have had to be very clever about inferring what’s really going on,” said Alyssa Goodman, the Robert Wheeler Willson Professor of Applied Astronomy at Harvard and a research associate at the Smithsonian Institution. “It took millennia for astronomers to figure out the true arrangement and motions of the planets orbiting the Sun on near-circular paths, so expecting school-age students to intuit the right answer is not fair, especially when they are fooled by both the projected view we have from here on Earth and from misleading illustrations in textbooks.”

ThinkSpace uses a blend of hands-on and computer-based tools in a classroom-laboratory setting. The computer-based activities are all built in WorldWide Telescope (WWT), an astronomy visualization program developed by Microsoft. The blend of visualizations and hands-on experiments gives students a visual model to learn about astronomy and improve their spatial-thinking skills.

“We developed the ThinkSpace program using research on how humans interpret and misinterpret two-dimensional diagrams and views in developing three-dimensional mental models,” said Goodman. “We’ve experimented with various combinations of tangible and virtual views and exercises that have now been shown to give learners a much deeper understanding of everyday phenomena, like moon phases and seasons, than they traditionally gain in school or life experiences.”

In 2015, Harvard’s WorldWide Telescope Ambassadors (WWTA) program received a grant from the National Science Foundation’s Discovery Research PreK–12 program to see how to effectively incorporate spatial-thinking strategies into astronomy taught in middle-school classrooms. The grant allows educators to gather data about how students learn spatial skills and what is needed to support their content understanding.

Patricia Udomprasert, or “Dr. Pat,” is the director of WWTA and a science education researcher at CfA, who led instruction in the classroom at both Putnam Avenue Upper School and Rindge Avenue Upper School. The complete ThinkSpace curriculum was shared with all eighth-grade science teachers and students in the Cambridge Public Schools.

“We’re learning from the teachers as much as they’re learning from us. It’s an important give and take,” Udomprasert said. “The partnership benefits everybody. CPS teachers are getting exposure to different ways of teaching these complicated ideas and we’re getting feedback on the curriculum. We have the research-based methodologies, but you have to make them work in real classrooms, and that’s where collaboration with teachers is critical.”

Using objects such as Lego figures, foam balls, light sensors, and “sky trackers” — clear plastic hemispheres that let students trace the paths along which celestial objects appear to move — students practiced connecting Earth- and space-based perspectives. In discovering the science behind the seasons, they learned how the angle of the Sun affects the temperatures on Earth. They also learned how the Earth’s tilted axis affects the angle of the Sun and how our location on Earth relates to the daylight hours we experience.

Erin Johnson, a WWTA program facilitator and education researcher who helps coordinate projects in Greater Boston-area schools, said, “Integrating what we experience on Earth with what we can explore about our solar system using virtual models like WWT is not only key for understanding the ‘why’ aspect of seasons, but the collaboration with CPS also aligns perfectly with the ThinkSpace research questions.

“Both our team and the district jumped at the opportunity to collaborate with the eighth-graders as they work to understand why we experience seasons in Massachusetts,” Johnson said. “Cambridge Public Schools has done a wonderful thing by incorporating the study of seasons into a larger unit around the human impact on Earth. Once students understand which things are natural, seasonal phenomena, they can begin to critically examine the impact that humans have on the system.”

Julie Craven, head of Rindge Avenue Upper School, said the collaboration with Harvard was a wonderful opportunity to bring together different areas of expertise, resulting in a highly engaging way for students to become interactive learners.

“The rich, science-based expertise coming from Harvard and the adolescent needs and instruction coming from eighth-grade teachers mutually reinforced each other so the curriculum became more deeply grounded in pedagogy,” she said. “It’s always helpful to have an expert in the field come in and have access to the real application. Students are listening to people doing the work, and that makes it real.”

“It’s great that we are taught by people who actually study this and do this for a living,” she said. “It’s fun, and we learn at the same time.”

Imran Hussain, 14, said what he learned will be helpful for his future.

“I like that Harvard people come in and teach this. They have experience and a lot more wisdom than us, they know a lot more, and they can pass that down to us,” he said. “Plus, they told us most of the Harvard students couldn’t answer the question about seasons, so if we’re prepared, then we will know a lot more than they do when we graduate.”

(“A Private Universe: Misconceptions that Block Learning,” a documentary co-created by Philip Sadler, F.W. Wright Senior Lecturer in the Department of Astronomy and director of the Science Education Department at the CfA, revealed that most graduating Harvard graduating students cannot explain what drives the change of seasons, and demonstrated how a lifetime of education impacted their incorrect understanding.)

“What was exciting is that we were able to come up with a model that benefited everyone, working collaboratively for the benefit of our students,” Scolaro said. “The challenge of research in education is doing it with an equity lens. When thinking about the education of our children, getting there, and seeing it all come together was really powerful.”