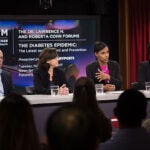 For the most part, scientists think of the trillions of microbes that call the human gut home as allies — after all, they’ve been shown to aid the body in synthesizing key vitamins and other nutrients.

But a new study suggests that things can sometimes be more adversarial.

Co-authored by Emily Balskus, the Morris Kahn Associate Professor of Chemistry and Chemical Biology, and Federico Rey, an assistant professor of bacteriology at the University of Wisconsin-Madison, the study shows that under certain conditions gut microbes can consume enough of a key nutrient to cause a deficiency in their hosts. The research was described in a paper in Cell Host and Microbe.

Choline is a key nutrient in a range of metabolic processes, as well as the production of cell membranes. Researchers identified a strain of choline-metabolizing E. coli that, when transplanted into the guts of germ-free mice, consumed enough of the nutrient to create a choline deficiency in them, even when the animals consumed a choline-rich diet.

“What we discovered … is the gut microbiome can actually deprive a host of this critical nutrient, and that has a lot of consequences for host biology,” Balskus said. “I think that’s why this is a significant finding — it turns our normal thinking of how gut microbes participate in nutrition on its head. We tend to think about the gut microbiome as playing a beneficial role in nutrition, and that’s definitely a role for it, but this work shows that under certain conditions the microbiome can also consume nutrients the host needs, and that can be a problem.”

Among the effects that can arise from choline deficiency, Balskus said, are changes in DNA methylation, a process in which the activity of a DNA segment is altered with the attachment of a methyl group. The process is essential for normal development and has been linked to everything from aging to carcinogenesis.

This study showed changes in DNA methylation across multiple tissues, not just in adult mice with a choline-consuming gut microbiota, but also in the pups of those animals while they developed in utero.

“That means the nutritional status of the mother actually affects what is happening to the pups as well,” Balskus said. “That connects to a long history of research on the transgenerational effects of malnutrition during pregnancy. This is just an animal model, but we’re seeing some of the same things happening that have been observed in clinical populations.”

The choline-deficient mice with choline-consuming gut microbes also showed much higher rates of infanticide, and exhibited signs of anxiety, with some mice over-grooming themselves and their cage-mates, sometimes to the point of baldness.

Understanding the potential consequences of choline deficiency is important, Balskus said, because research has shown many people may be at risk. While most people don’t get enough of the nutrient in their diet, tests have also shown as many as 65 percent of healthy individuals carry genes that encode for the enzyme that metabolizes choline in their gut microbiomes.

“There may be other factors that affect the extent to which this gut microbial activity is problematic,” she said. “But we think that … microbe-mediated deficiencies in this nutrient may be a previously unrecognized link to some diseases.”

A better understanding of those links — between choline-consuming microbiomes and undernutrition, choline deficiencies and potential disease — could lead to changes in dietary recommendations, Balskus said.

“Being aware this is possible could be something that informs nutritional guidelines,” Balskus said. “In terms of clinical practice, particularly in the context of malnutrition or undernutrition … knowing that choline metabolism might be a problem, you can imagine trying to find a dietary intervention that would shift the microbiome away from metabolizing choline if you find the right nutrients to replace it.”