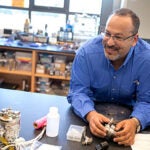 Taxes on sugary beverages seem to cut consumption, a Harvard public health expert said Tuesday, describing the sometimes controversial tariffs as one path of attack against the U.S. diabetes epidemic.

“Consuming those drinks is very tightly linked to both obesity and diabetes,” Bleich said of the single largest source of added sugar in the American diet.

Philadelphia’s tax-related drop came amid reports that consumption of soda and other sugary beverages has been in decline nationwide, said Bleich, speaking as part of a panel at the Harvard Chan School on the toll of diabetes and the future of treating the disease.

LaShawn McIver, senior vice president of government affairs and advocacy for the American Diabetes Association, noted that the metabolic disorder is the seventh leading cause of death in the U.S., killing more than AIDS and breast cancer combined, and costs the country $322 billion annually.

One in 11 Americans — some 30 million people — has diabetes, according to the Centers for Disease Control and Prevention. Many more — about 84 million — have prediabetes. Complicating the picture, McIver said, is that nearly 90 percent of the latter group aren’t aware of the threat.

“This is a huge issue from a public health perspective,” McIver said.

Diabetes is closely linked to the nation’s obesity epidemic, with nearly 90 percent of those with type 2 diabetes — the vast majority of cases — also overweight or obese. The root problem, Bleich said, is that we live in an environment rich in cheap, convenient, calorie-laden foods, and an era of increasingly sedentary lifestyles.

That’s where food policy comes in, she said. Policy can alter the food environment and make consumers less dependent on willpower alone. Taxes alter environment by making cost a more significant factor. Another effective tactic, Bleich said, is requiring calorie counts on restaurant menus, so that customers can consider not just price and taste, but also the health effects of meals.

Requiring calorie counts on menus began in New York in 2006 and has since spread to other states, Bleich said. A federal version of the requirement contained in the Affordable Care Act is set to take effect next year. The measures have had less impact on consumer choices than on restaurants, which have been dropping the highest-calorie dishes and adding new ones that average 12 percent less, a difference of roughly 60 calories.

“It sounds small, but at a population level, if you can extract that number of calories out of the diet, it can actually have a pretty big impact on levels of both obesity risk and diabetes risk,” Bleich said.

Panelists also discussed the role of technology in treating the disease. Continuous glucose monitors use a probe under the skin to keep tabs on blood sugar, with data uploaded for doctors to review. They can also send out help signals.

Howard Wolpert, vice president for medical innovation at the Lilly Innovation Center, said that technology can both improve blood sugar control — reducing risk of complications such as blindness, kidney failure, and infections — and make medical care more efficient. People whose blood sugars are relatively stable can see the doctor less frequently, while those with erratic sugars can keep regular appointments.

Telemedicine, Wolpert said, has the potential to make a bigger difference, extending the reach of physicians to underserved communities, like Native Americans and Inuits, in which care is scarce but rates of diabetes are high.