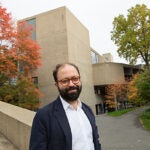 For Lily Calcagnini, Harvard ‘is a place where students with intellectual curiosity can study precisely whatever they want’

When Lily Calcagnini ’18 needs inspiration, she plants herself in the courtyard of the Harvard Art Museums.

“People who study art have a nice appreciation for aesthetics and aren’t afraid to dress in quirky ways,” she said. “I always see a nice mix of ages there. The fashion magazines really discount the value of having 60 or 70 years of life behind you to inform style, and some of the best-dressed people at the HAM [Harvard Art Museums] are 75-year-old women with funky-colored glasses and woven shoes.”

Her runway view of the museum hints at the unorthodox perspective that drove Calcagnini to petition for a concentration in history and literature that places fashion front and center in cultural theory.

“Harvard is not classically a place to study fashion,” she said. “But it is a place where students with intellectual curiosity can study precisely whatever they want.”

A native New Yorker, Calcagnini grew up exploring the museums and visual arts of the city. As a young girl, she trained as a ballet dancer, and dabbled with voice and piano lessons. In high school, she nourished her growing interest in fashion and fashion journalism by making mood boards and reading Vogue, Harper’s Bazaar, Man Repeller, and Refinery29.

During the spring of her sophomore year at Harvard, through a course called “Culture as a Source of Social and Economic Value,” Calcagnini began to see fashion as a vibrant player in popular culture, relevant to a country’s political, economic, and social well-being. She also got involved in Eleganza, a charity fashion show held on campus to benefit the Center for Teen Empowerment. Both experiences allowed her to see fashion as more than “just clothes that people buy.”

“Gender identity, cultural identity, socioeconomic identity, what people can afford or what they want to think they can afford, religious beliefs, amorphous values — all the things that most plague people are tied up in fashion,” she said. “Using fashion as a way to construct your identity isn’t something you can take for granted because clothing operates on two levels: the necessity of needing to clothe yourself — skin coverage — and the level of having disposable income to own whatever you want.”

Professor John Stilgoe, long interested in fashion design and a co-adviser for Calcagnini’s senior thesis, called hers “one of the most developed eyes for the visual that I’ve encountered in my 43 years here.” He gave Calcagnini extra credit for the focus of her project: the increasingly fraught line between fashion and cultural appropriation.

“She’s a very courageous emerging scholar and she’s tough,” said the Robert and Lois Orchard Professor in the History of Landscape in Visual and Environmental Studies. “She was watching a fashion show, and a model came out wearing a turban. The woman next to her said, ‘This is cultural appropriation,’ while the woman on the other side said, ‘That is beautiful.’”

Though she’s “not finding a scientific cure or locating life on another planet,” the Dunster House resident and former editor of the Harvard Book Review said that fashion “in a terrestrial way is very important.”

“It deals with identity, which is something other people struggle with, too,” she said. “I’m most interested in the relationship between socioeconomic status and fashion. People often use clothes to fool others into thinking they’re richer or poorer than they are.”

That interest has sent her back through time, to the hippie movement of the 1960s, when the rich dressed down, and mid-century status-conscious films and novels such as the Audrey Hepburn classic “Roman Holiday” and Patricia Highsmith’s “The Talented Mr. Ripley.”

But threading the past to the present requires more than research. Calcagnini still designs collage boards — now with mixed body shapes to more dramatically show scale — to help illustrate her arguments.

“The thing that bothers me most about high fashion is how it seems really unattainable and often intimidating for the average person,” she said. “Ads in fashion magazines show brands like Louis Vuitton with a bronzed leggy model. I don’t look like her. I can’t afford those clothes, and they probably won’t even look the same on me. I do the collages because I like proving that dressing yourself doesn’t have to be scary.”