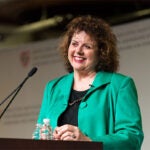 The diet that may be America’s healthiest may also be its stealthiest. It’s not called paleo or Atkins or Scarsdale, but instead bears the dry acronym of the 1990s studies that confirmed its effectiveness: DASH.

Dietary Approaches to Stop Hypertension was an initiative designed to better understand how diet might mitigate a global killer: high-blood pressure, estimated to affect 1.4 billion around the world. The DASH diet proved effective, lowering blood pressure at a rate equivalent to that of some medications.

“It’s always recommended — the best diet in America — so why haven’t you heard about it?” said Lawrence Appel, the leader of the study and a Johns Hopkins professor. “Maybe we should have a different name. … If only we had called it the South Beach Diet.”

Launched in 1993, the DASH study involved researchers at four centers around the country, including Harvard, where Professor Frank Sacks played a key role. DASH, Appel said, was a “feeding study,” in which food was provided for 459 participants with an average age of 46. It tested a whole-diet approach.

The study compared a control representing the average U.S. diet with both a produce-heavy regimen and DASH, which emphasized fruits and vegetables, low-fat dairy, whole grains, nuts, poultry and fish, and restricted red meat, saturated fats, and sweets.

The DASH diet proved most effective of the three, lowering blood pressure an average of 5.5 millimeters of mercury (mm Hg) — the standard unit for blood pressure — for systolic pressure, and 3 mm Hg for diastolic pressure. The decline was even greater for those suffering from high-blood pressure and for African-Americans, a group that experiences a disproportional prevalence of the disorder.

Three follow-up studies probed what factors made DASH effective and whether it could be further improved. Those studies lasted through 2011 and added different wrinkles — lowering salt and substituting greater amounts of healthy fats and protein for carbohydrates, and testing different types of carbohydrates. The DASH-sodium diet found that pairing the DASH diet with lower salt — 1,500 milligrams a day — could cut blood pressure an average of 8.9/4.5 mm Hg, and by 11.5/5.7 mm Hg for those with high-blood pressure.

The studies have been influential among experts, but are less familiar to the public, Appel said. DASH has been widely cited in the years since it was conducted, and provides a foundation for various nutritional guidelines. It has been recommended by groups such as the American Heart Association, the National Institutes of Health, and the Department of Agriculture, both for blood pressure and for general health.

The prevalence of high blood pressure means DASH needs to be adapted to different cultures, Appel said. Additional follow-ups are also needed, and Appel urged the next generation of public health researchers to take up the cause — though he warned that the funding environment is difficult and that politics surrounding foods like salt and sugar are tricky. Areas in need of more research, Appel said, include the effects of the DASH low-sodium diet in different populations, such as children, and conditions, such as chronic kidney disease and heart failure.

“We still need a fleet of people to continue the battle,” Appel said.