Learning from a legend (a.k.a. Dad) 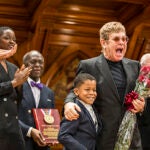 It seemed likely that centennial celebrations of the life and work of legendary maestro Leonard Bernstein ’39 would spill over with music, requiring more than a single year.

And that is precisely how the occasion — with more than 2,000 concerts and shows already planned across the country and the world — is shaping up.

“It’s an unrepeatable opportunity to remind the world of who he was, what he did, the legacy, and to introduce him to a new generation of music lovers who don’t know who he is anymore,” said Jamie Bernstein ’74, who will crisscross the globe with her brother and sister for many of the events celebrating their Lawrence-born father. “It is quite an undertaking, and a good thing I have two siblings.”

Bernstein came to campus late last month for a concert talk with the Harvard Radcliffe Orchestra. Before the concert, she met students taking Carol Oja’s course on her father’s Young People’s Concerts.

“Leonard Bernstein’s historic work with the New York Philharmonic offers an opportunity to study classical music performance within the context of social justice and American culture at large,” said Oja, the William Powell Mason Professor of Music, who described her course as “a mix of memory, music, and media.”

Jamie Bernstein’s visit came as students were preparing to travel to New York to see (and hear) the philharmonic and interview longtime subscribers who attended the concerts as children. In her time on campus, Jamie joined students to watch archival clips from the Young People’s Concerts, which began in 1958 when her father persuaded CBS to broadcast the shows.

“It was always too long. There’d be frantic, feverish lunch meetings between performances. My dad never wanted to cut anything, but they had to,” said Jamie, whose earliest memories as a girl on the set include stealing donuts from the musicians and eating roast beef sandwiches.

She also remembered the Kinks’ “You Really Got Me” coming on the radio during the drive home to Connecticut after a performance.

“That’s in the Mixolydian mode,” her father observed. “Do you know what a mode is?” Jamie was stumped. Sure enough, the title of the next Young People’s Concert was “What Is a Mode?”

“He could never turn off the teaching faucet,” she said. “It was his impulse on everything he did. We got it at home 24/7.”

Harvard Radcliffe Orchestra conductor Federico Cortese, who as a student at Tanglewood had a chance to see Leonard Bernstein at work, described the maestro as “the most communicative musician I’ve seen in my whole life.”

“It was inspiring,” he said.

Jamie Bernstein talked about her father’s political and social consciousness, which was demonstrated in the pieces and places he played. In 1948, during the Israeli War of Independence, he led the Israel Philharmonic in Beethoven’s First Piano Concerto. When the Berlin Wall fell, in 1989, he made Beethoven’s Ninth Symphony, with its “Ode to Joy,” his song of celebration.

Disciplines among Oja’s students range from neurobiology and philosophy to computer science and music. Some play instruments, and several cited “West Side Story” as their baseline knowledge of Bernstein. Few had heard of the Young People’s Concerts before the course.

“I don’t think I have ever taken a course that is so specifically focused on one individual,” said Arlesia McGowan ’19, a concentrator in human developmental regenerative biology and music. “I like that we have spent a lot of time not only getting to know Bernstein as an artist but as a person. I feel like with a lot of composers-conductors, we musicians only know them by their music … we often forget that they are humans like us who were criticized just as much as they were praised.”

Before the classroom conversation, Jamie Bernstein described working to uphold her father’s legacy through her 2014 documentary “Crescendo! The Power of Music,” about children in U.S.-based youth orchestras for social change that were modeled after Venezuela’s groundbreaking El Sistema program.

“These Venezuelan youth orchestras were originally devised as a way to get the kids off the streets, but what became clear very quickly was that not only was it a safe space, it was also an environment where kids could learn the best lessons for being a good person in the world,” she said. “It reminded me so much about my dad, and how he used music to express the best things about humanity. You are not just playing your instrument in your ivory tower. You are using music to make the world a better place.”

Jamie recalled that her time as a Harvard student was “not my happiest.” Homesickness was a challenge, along with her father’s larger-than-life visits.

“Those were tough years for me, further complicated in my junior year,” she said. “Guess who arrived on campus to give the Charles Eliot Norton Lectures? And who had so much fun he came back in my senior year? It’s only been in the last decade I could find ways to come back to the Harvard campus and feel like I’m adding value in some way.”