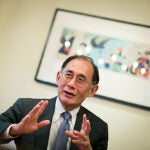 Looking for a person, and perspective

At a Meeting of the Faculty of Arts and Sciences on Nov. 7, 2017, the following tribute to the life and service of the late Adam Marian Dziewoński was placed upon the permanent records of the Faculty.

Adam Marian Dziewoński was born in Lwów, Poland (now Lviv, Ukraine) and received his M.S. in 1960 from the University of Warsaw and his Doctor of Technical Sciences in 1965 from the Academy of Mines and Metallurgy in Krakow. He moved to the United States in 1965 as a research associate at the Graduate Research Center of the Southwest in Dallas and became an assistant professor at University of Texas at Dallas in 1969.

Adam moved to Harvard University as an associate professor in 1972, became a full professor in 1976, and was named the Frank B. Baird, Jr., Professor of Science in 1994. He was the chair of the Department of Geological Sciences between 1982 and 1986 (Department of Earth and Planetary Sciences thereafter). He retired in 2009 but remained actively engaged in research until his death.

Adam was born in a year of seismological significance, the year in which the Earth’s inner core was discovered. As if fated, Adam was involved in all subsequent major discoveries about this deepest layer of Earth. With James Freeman Gilbert, Adam provided the first direct evidence that the inner core is solid, settling the debate over its nature. He continued his work on the inner core with his colleagues at Harvard and went on to show that it is anisotropic, rotates at a slightly different rate than the mantle, and has another layer at its center.

Despite these immense contributions, most seismologists and geophysicists today would not consider studies of the inner core to be Adam’s main contributions to the field of Earth science.  Some would undoubtedly cite the development of the Centroid Moment Tensor (CMT) determination of earthquake mechanisms, a now-standard method for earthquake characterization. Earthquake magnitude and location are important, but an earthquake’s disaster potential depends also on its mechanism. Adam’s former student and colleague Göran Ekström continues to publish nearly real-time CMT results that are widely cited as the basis of countless analyses today.

Some would cite the development of the Preliminary Reference Earth Model (PREM), which he constructed in 1981 with the late Don Anderson of Caltech, a depth-dependent model of the Earth that describes the properties of the internal layers. Though this model was intended to be “preliminary,” it remains the most popular model in the geosciences community, receiving about 200 citations each year.

Others might name as Adam’s major legacy the development of seismic tomography, a technique that scans the interior of the Earth for three-dimensional reconstruction, showing previously inaccessible snapshots of the Earth and opening possibilities for studies of geodynamics and mineral physics based upon realistic views of the Earth’s interior. He did this work in close collaboration with John Woodhouse.   Adam said:

A turning point in the breadth of my studies is closely associated with the arrival to Harvard of John Woodhouse in the fall of 1978. . . . Typically, on days that did not involve teaching we [John Woodhouse and I] would have worked until dawn, which was documented by heaping ashtrays that horrified other users of the computer room arriving in the morning.

Adam’s work was so fundamental that these advancements are now deeply embedded in the foundations of today’s Earth science. Not a day goes by without geoscience research conducted based upon techniques or models Adam influenced.

In addition to his vigorous research program, Adam worked to establish facilities and resources for the Earth science community. He was instrumental in the founding of the Incorporated Research Institutions for Seismology (IRIS), a prospering U.S. research consortium with more than 100 university members, and of the Federation of Digital Seismic Networks, an international organization that supports seismological research based upon international cooperation and data sharing. He was also a significant member in the establishment of the Cooperative Institute for Deep Earth Research, which promotes interdisciplinary and collaborative research and educates the next generation of Earth Scientists.

One key component of IRIS is the Global Seismographic Network (GSN), which provides near real-time data used to monitor the occurrences of earthquakes worldwide and for seismological research. In the 1980s, the ideas of GSN and IRIS were developed at the Harvard Seismograph Station, within the Oak Ridge Observatory complex. Adam had directed the station since his arrival in 1972, and his graduate student Joe Steim created the first digital broadband seismograph capable of providing data for global-scale research, which became the prototype for the GSN and many other national and international networks. The instrumentation techniques based upon this work are now being used at seismograph stations around the world. In 2009, the station was renamed the Adam Dziewoński Observatory. It continues to produce some of the best quality data of all the GSN stations.

Adam’s fundamental contributions to Earth science have been recognized nationally and internationally. He and Don Anderson received the Crafoord Prize for study of the deep Earth in 1998, and he was awarded the Harry Fielding Reid Medal of the Seismological Society of America and the William Bowie Medal from the American Geophysical Union. He was a member of the National Academy of Sciences and a fellow of the American Academy of Arts and Sciences and of the American Association for the Advancement of Sciences. When Adam arrived in the United States in 1965, his mentor, Anton Hales, told him that to be recognized in the United States, he would need to change his last name. Adam dropped the accent above the “n,” but today, any solid-Earth scientist recognizes and can spell his name (although it is still difficult to pronounce).

Adam was an exceptional scientist and leader whose imprint has shaped his field.  He was also a generous mentor, friend, and colleague. Adam was predeceased by his wife of 43 years, Sybil. He is survived by his brother, Stanislaw; sister-in-law, Ewa; two nephews, Marcin and Jakub; three grandnieces, Marianna, Lena, and Nina; and two grandnephews, Jan and Ivo.

Portions of this Minute were previously published by the Department of Earth and Planetary Sciences, Harvard University, in “Adam Dziewonski, A Life in Geophysics: 75th Anniversary,” http://dziewonski_symposium.fas.harvard.edu/conf_adam_bio.html, and by the Boston Globe in “Adam Marian Dziewonski (1936 – 2016),” April 3, 2016, http://www.legacy.com/obituaries/bostonglobe/obituary.aspx?pid=179487398.