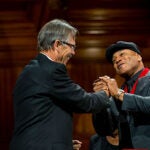 Before last June, Matt Presser had never been to Iowa. But by the end of the summer, he had put more than 6,000 miles on a rental car, driving all over the state to talk with people about the state’s educational system.

Presser is one of a handful of students awarded a Harvard Presidential Public Service Fellowship, a seven-year-old program supported by President Drew Faust that provides funding for a select group of undergraduate and graduate students to pursue summer-long projects around the United States that serve the common good. The fellowships support work that spans the spectrum of public service, including education, arts, government, social services, and nonprofit organizations.

Presser, a doctoral candidate in educational leadership at the Harvard Graduate School of Education, worked at the Iowa State Department of Education, where he undertook an evaluation of the state’s landmark teacher leadership and compensation system, a program in effect for all 333 school districts. Presser also spent time investigating the problem of chronic absenteeism, a priority of Iowa’s governor, writing profiles and case studies about how districts are taking innovative approaches to tackling the issue.

Presser said the fellowship let him experience another part of the country and broaden his thinking in novel ways.

“Most of my work had been on the East Coast or in urban centers. This was really a chance for me to get an outside perspective,” he said. “So much of our country is rural or looks like Iowa does, so it felt really important for me to take some of the thinking that I was doing at the Ed School after my first year and put it to the test in a place that was totally unfamiliar.”

Caroline Tervo, a Harvard College senior studying government, spent the summer working on government and public policy issues. As an intern in the North Carolina governor’s office, she spent much of her time researching issues affecting the state, such as the opioid crisis. But Tervo also had the opportunity to help deal with situations as they arose, such as when, two weeks into her fellowship, contaminants were found in the Cape Fear River, which provides drinking water to 60,000 residents. Tervo jumped in to keep track of all of the developments, which gave her an inside look into how a state office handles emergency situations.

She also helped push the governor’s priorities, including strategies to support successful prisoner re-entry into society and to address unmet classroom needs in the public schools.

“I really care about my state, and it was powerful to me to see, even with all of the things going up against this governor’s office, that there were so many dedicated people committed to being there, people who wanted to make a difference for other people’s lives,” she said. “That’s the beautiful thing to me about public service.”

Lamees El-sadek, a public health doctoral student at the Harvard T.H. Chan School of Public Health, used her fellowship to return to her home state of Mississippi to work with the State Department of Health, focusing on building health equity infrastructure. She addressed this goal by writing and publishing the state’s second health disparities and inequalities report and working toward establishing a task force.

El-sadek had worked for the Mississippi Health Department before coming to Harvard, and published its first health disparities and inequalities report in 2015. When she learned that budget cuts had closed the Office of Health Disparity Elimination, she started thinking about creative ways to continue the work in the absence of a dedicated office. When she learned about the Presidential Public Service Fellowship, “It was a perfect fit. It provided the ideal opportunity to go back home and pursue this project that was very relevant to the state, and also put me in a role I’d never been in before.”

Much of her time was dedicated to creating a task force to draw stakeholders from across the state to keep health disparities a priority. She met with more than 40 potential partners, including elected state leaders, the largest health-focused foundations, health policy think tanks, and lobbying groups, to introduce the idea of a task force and to gain insight and feedback on her vision for it.

All three fellows said being at Harvard meant they could give back through public service. “It’s a tremendous privilege to be here, and I think that immediately connected to that privilege is a responsibility to make the world better, to contribute back what we’ve gotten,” Presser said.

Tervo most appreciated Faust’s direct support of the fellowship. She noted, “It’s really valuable for me to have someone of such authority on Harvard’s campus communicate that it is a priority to the University that students pursue these opportunities. I think that says a lot about Harvard’s willingness to support students in making a difference at all levels of public service in a way that has a really profound implication.”