History under the microscope 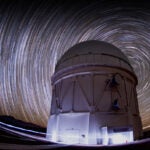 A new collaboration between Harvard’s Initiative for the Science of the Human Past and the Max Planck Institute for the Science of Human History is seeking to direct research momentum to the Mediterranean, where recent probes have identified the source of plague outbreaks and where genes drawn from ancient bones are illuminating how people came and went, challenging ideas drawn from texts and other traditional historical sources.

The effort, represented in the new Max Planck-Harvard Research Center for the Archaeoscience of the Ancient Mediterranean, was inaugurated this month, with an Oct. 10 signing ceremony and a series of lectures presenting ongoing research.

Michael McCormick, the Francis Goelet Professor of Medieval History, chair of the Initiative for the Science of the Human Past, and chair of the new center’s steering committee, said that the work has opened important lines of communication between experts in the sciences and the humanities.

Harvard Medical School Genetics Professor David Reich, who also serves on the steering committee, presented an overview of the genetic techniques behind a series of recent advances, saying that technology developed at the Max Planck Institute allowed researchers to extract DNA from ancient bones and made a host of remains-focused genetic studies possible for the first time.

Work since then, Reich said, has focused on lowering costs so that the efforts can be expanded. The techniques he described have been used in recent years to trace the movement of different groups into and across Europe.

Reich and McCormick’s made their comments in the Thompson Room of Harvard’s Barker Center, where the new Max Planck-Harvard Research Center for the Archaeoscience of the Ancient Mediterranean held its inaugural meeting. Among the speakers were Susan Alcock, a professor of classical archaeology and classics at the University of Michigan; Iosif Lazaridis, a postdoctoral fellow in the Genetics Department at Harvard Medical School; and Johannes Krause, director of the Max Planck Institute for the Science of Human History’s Archaeogenetics Department, who discussed findings on plague outbreaks.

Bubonic plague, caused by the bacterium Yersinia pestis, had the highest potential to cause disease and death, Krause said, and drove at least three events, including the Black Death in the mid-1300s and the Justinian Plague hundreds of years earlier. The causes of several other plagues, such as the Antonine Plague, which is thought to have stopped the expansion of the Roman Empire, are still unknown and potential targets for future research.

“For some of those historical outbreaks, we have some idea … what might be the pathogens actually responsible for the outbreaks, but often we have no idea because just based on the historical record it is very hard to know what type of pathogen it might have been,” Krause said.