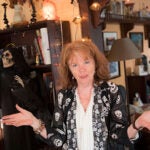 On a cool October evening, the pre-eminent Mexican archaeologist Eduardo Matos Moctezuma regaled the audience gathered at the National Museum of Anthropology in Mexico City with accounts of the discoveries at Templo Mayor, the main Aztec temple there.

While a screen showed images of ritual offerings, effigies depicting gods, and remains of human sacrifices, including a massive, skull-covered wall, Matos explained how all those findings helped people understand the cosmology of the Aztecs, one of the world’s great civilizations.

Matos spoke at the inaugural lecture of the Eduardo Matos Moctezuma Lecture Series, a joint initiative of the David Rockefeller Center for Latin American Studies (DRCLAS), Harvard Divinity School, and the Moses Mesoamerican Archive and Research Project to honor the archaeologist’s achievements.

The five-year lecture series, which will allow scholars who study Mexico to present their work in Mexico and at Harvard, was an initiative of David Carrasco, the Neil L. Rudenstine Professor for the Study of Latin America, who teaches at Harvard Divinity School, Harvard Extension School, and in the Department of Anthropology.

Carrasco met Matos in 1976, and the two have since collaborated on joint publications and projects on Mesoamerican history and religion. Carrasco considers Matos his mentor and one of Mexico’s major cultural figures for his role in shaping national identity, he said at the event.

Carrasco quoted, in his remarks, an enthusiastic Mexican cabdriver who told him, “Matos Moctezuma showed us, Mexicans, who we really are when he uncovered the Great Temple.”

A professor emeritus at Mexico’s National School of Anthropology and History, Matos led the excavations of the Templo Mayor of Tenochtitlán for 40 years after it was accidentally discovered by electrical workers in 1978. His work unveiled for the first time the ritual heart of the Aztec empire, and helped people better understand the Aztecs, the people ruled by warfare and agriculture who built Tenochtitlán into one of the world’s largest cities in the 16th century.

The Matos Moctezuma lecture is the first at Harvard to honor a Mexican, said Carrasco, and the series seeks to build and strengthen existing educational and research ties with Mexico.

“We’re here to mark the partnership between Professors Carrasco and Matos,” said Mark Elliott, Harvard’s vice provost for international affairs and Mark Schwartz Professor of Chinese and Inner Asian History, who led a University delegation to Mexico City. “I have seen some other great partnerships too, because when our faculty come to work here, they do not work alone. They work together.”

Among those who traveled with Elliott to Mexico City were Brian Farrell, DRCLAS director and professor of organismic and evolutionary biology, and David Hempton, dean of Harvard Divinity School and Alonzo L. McDonald Family Professor of Evangelical Theological Studies and John Lord O’Brian Professor of Divinity.

The lecture series is supported by José Antonio Alonso Espinosa, a Mexican donor whose family founded a history museum in Puebla, and it highlights the importance of cultural institutions such as museums or universities, said Elliot.