A decade of growth at SEAS 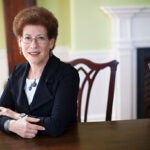 Harvard’s John A. Paulson School of Engineering and Applied Sciences (SEAS) kicked off the fall semester in style, celebrating the 10-year anniversary of its formation as a School with a series of community events. Attendees at 10 Days of SEAS were treated to tours and lectures, closing with a celebration that included the signing of a steel beam that will be installed atop the new Allston Science and Engineering Complex.

“Pulling together this vibrant community of researchers in applied science and more traditional engineering under one roof, under one School, was truly historic for Harvard,” said Frank Doyle, the John A. Paulson Dean of SEAS and the John A. and Elizabeth S. Armstrong Professor of Engineering and Applied Sciences. “Recognizing that we had this anniversary, we wanted to spend some time reflecting on what had been accomplished over the past decade, the compelling mission we are on, and where we are going over the next 10 to 20 years.”

“By having this enabling liberal arts foundation, our students are trained to appreciate the implications of their studies for the humanities, social sciences, and the arts,” said Doyle. “Grounded in this environment, it truly enables them to tackle meaningful and deep engineering problems, from enhancing medical technologies to improving energy inefficiencies or impacting the climate in a profound way.”

“Harvard has developed an approach to engineering that sets it apart from the legacy engineering schools. Instead of being moored to academic structures that arose from 20th-century technological priorities, SEAS foregrounds academic connection and collaboration across disciplines and faculties to enable the pursuit of the possibilities and grand challenges of today and tomorrow,” said Michael D. Smith, Edgerley Family Dean of the Faculty of Arts and Sciences (FAS) and John H. Finley Jr. Professor of Engineering and Applied Sciences.

Nowhere is this dedication to the convergence of engineering, foundational science, and liberal arts more apparent than in the variety and number of students whom SEAS programs and classes attract. Over the decade, the School’s undergraduate enrollment numbers have skyrocketed, growing by over a factor of three. Two of the top five Harvard College concentrations, computer science and applied math, find their homes in the School, while the introductory computer science course, CS50, is one of the most popular classes.

“The students are voting with their feet,” said Venkatesh Narayanamurti, the former SEAS dean and current Benjamin Peirce Research Professor of Technology and Public Policy who oversaw the transition from a division to a School. “Enrollment in computer science alone has grown beyond my wildest dreams. I think the full impact of this will probably only be known in 20 to 30 years.”

Priscilla Guo ’18, a special concentrator in technology, policy, and society, has customized her education by taking classes ranging from computer science and engineering to government, history of science, sociology, and economics. After her exposure to coding and computer science classes at the College, Guo found a more specific way of connecting to her interests through interdisciplinary coursework. She credits the research she’s been able to conduct during her undergraduate education with allowing her to make meaningful findings and directly affect her field.

“When I first came to Harvard. I thought I was going to study government or economics,” said Guo. “I was very excited about the idea of working in politics, and I really wanted to make a difference in terms of public service. At Harvard, I’ve been able to find a way to fight for principles of fairness, justice, and equality through technology,” she said.

Programs for graduate students have flourished. The School has added a master’s degree in computational science, as well as master’s programs in design engineering in cooperation with Harvard’s Graduate School of Design, in entrepreneurship jointly with the Harvard Business School, and in data science with the Department of Statistics.

“I think there was a real recognition that industry needed talented students trained in computational methods and massive simulations,” said Cherry Murray, Benjamin Peirce Professor of Technology and Public Policy and professor of physics, who oversaw much of the School’s curriculum redesign during her tenure as dean. “Equally important, the courses in the computational master’s curriculum are open to all FAS graduate students, and offer real value as a secondary field for Ph.D. students who want to deepen their knowledge of statistics, data science, and computational methodology.”

SEAS’ physical expansion to Allston is a key part of the School’s future growth. The new Science and Engineering Complex (SEC) there will feature both wet and dry laboratories, maker spaces, student spaces, and classrooms. It is located in the middle of a dynamically innovative section of the Harvard campus, close to both the Business School and the Harvard Innovation Labs, with access to the Longwood Medical Area. Current freshman will be among the first students to set foot in the complex when it opens during the fall of their senior year.

The complex will provide an opportunity for new intellectual collisions and interactions, and for breaking down the academic barriers of 10 or 20 years ago, providing space for integrated interdisciplinary work, said Doyle.

“I think the biggest difference you are going to see in the 10- to 20-year time frame will be the realization of a far more integrated Harvard, very much fulfilling the vision of President [Drew] Faust’s ‘One Harvard.’ We have witnessed this over the last decade, truly, already, but being able to expand our range of activities, to capitalize on these great cross-School initiatives that are currently taking root, will result in them blossoming in 10 to 20 years.”