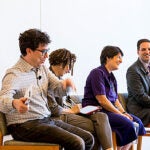 Marking the beginning of a new era in astrophysics, scientists for the first time have detected gravitational waves and electromagnetic radiation, or light, from the same event. This historic discovery reveals the merger of two neutron stars, the dense cores of dead stars, and resolves debate over the origins of heavy elements such as platinum and gold.

To achieve the result, thousands of scientists around the world used data from telescopes on the ground and in space. Researchers at the Harvard-Smithsonian Center for Astrophysics (CfA) played a pivotal role in the work. A series of eight papers by CfA astronomers and their colleagues details the aftermath of the event and examines clues about its origin.

“It’s hard to describe our sense of excitement and historical purpose over the past couple of months,” said the leader of the CfA team, Harvard’s Edo Berger. “This is a once-in-a-career moment — we have fulfilled a dream of scientists that has existed for decades.”

Gravitational waves, first predicted by Einstein’s general theory of relativity, are ripples in space-time caused by the accelerated motion of massive celestial objects. The Advanced Laser Interferometer Gravitational-Wave Observatory (LIGO) made the first direct detection of gravitational waves in September 2015, when the merger of two stellar-mass black holes was discovered. That work was honored earlier this month with the Nobel Prize in physics.

“Imagine that gravitational waves are like thunder. We’ve heard this thunder before, but this is the first time we’ve also been able to see the lightning that goes with it,” said Philip Cowperthwaite of CfA. “The difference is that in this cosmic thunderstorm, we hear the thunder first and then get the light show afterwards.”

A few hours after the announcement, as night set in Chile, Berger’s team used the powerful Dark Energy Camera on the Blanco telescope to search the region of sky from which the gravitational waves emanated. In less than an hour they located a new source of visible light in the galaxy NGC 4993 at a distance of about 130 million light-years.

“One of the first giant galaxies we looked at had an obvious new source of light popping right out at us, and this was an incredible moment,” said CfA’s Matt Nicholl. “We thought it would take days to locate the source, but this was like X marks the spot.”

Several teams of astronomers, including Berger’s CfA group, scrambled to capture as many details as possible from the rapidly fading neutron star collision, known as a kilonova.

“The plan was simple: capture every single photo of light from this event to uncover all of its detailed physical processes,” Berger said.

From their measurements, astronomers were able to detect “the direct fingerprints of the heaviest elements in the periodic table,” in amounts totaling some 16,000 times the mass of Earth.

“As this material is flying out from the site of the two neutron stars merging, it will eventually combine with other material to form stars, planets, life, and jewelry,” Berger said.

The neutron stars themselves, he said, were formed in supernova explosions when the universe was just 2 billion years old and spent the last 11 billion years spiraling in decaying orbit around each other. Supernova explosions like the one that produced the neutron stars are known to create lighter elements, such as iron and nickel. Watching the neutron star collision, scientists were able to see the source of the heavier elements in the periodic table, such as gold, platinum, and uranium.

“In this one system, we see the complete history of how the periodic table of the elements came into being,” Berger said.

Radio observations with the Very Large Array in New Mexico helped confirm that the merger of the two neutron stars triggered a short gamma-ray burst (GRB), a brief burst of gamma rays in a jet of high-energy particles. The properties match those predicted by theoretical models of a short GRB that was viewed with the jet initially pointing at a large angle away from Earth. Combining the radio data with observations from NASA’s Chandra X-ray Observatory shows that the jet pointed about 30 degrees away from the planet.

“This object looks far more like the theories than we had any right to expect,” said CfA’s Kate Alexander, who led the Very Large Array observations. “We will continue to track the radio emission for years to come as the material ejected from the collision slams into the surrounding medium.”

Many observatories were used to study the kilonova, including the SOAR and Magellan telescopes, the Hubble Space Telescope, the Dark Energy Camera on the Blanco, and the Gemini-South telescope.

The series of eight papers describing the results were published in The Astrophysical Journal Letters on Monday. The four papers with first authors from CfA are on the changes with time of light from the kilonova (Cowperthwaite); the changes with time of the kilonova’s spectrum (Nicholl); the Very Large Array observations (Alexander); and how long the merger took to unfold and the properties of the host galaxy (Peter Blanchard).