The selfie’s gone, but the damage is done 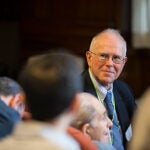 History under the microscope

Yeah, it’s temporary, but you still might want to think twice before posting that.

That’s the message from new Harvard Business School research that looks at behavior on temporary social media platforms such as Snapchat and Instagram Stories. The research, published this week in the Proceedings of the National Academy of Sciences, compiled results from nine studies conducted online and on college campuses exploring what people were comfortable sharing on temporary platforms and how the posts were perceived.

The results, according to senior author Leslie John, Marvin Bower Associate Professor at the Business School, show that people are likelier to make an uninhibited post on a temporary platform, but that viewers are no less likely to judge them harshly.

John, who conducted the work with Reto Hofstetter and Roland Rüppell of the Università della Svizzera Italiana, said that the findings reflect a disconnect between the assumptions of the actor and the observer. The actor believes he or she is exercising good judgment by using a temporary platform to make a goofy post, while the observer’s reaction to the post is irrespective of platform.

“If you look goofy in your photos, the recipient thinks you have bad judgment. They don’t give you credit for having shared the image temporarily,” John said.

John noted that the research didn’t explore the potential benefits of posting on temporary platforms, such as the material’s shorter life span acting as a check on the number of people who see it. In addition, John said, though a less-inhibited post can deliver a blow to one’s perceived “competence” — a key factor by which we are judged — the study didn’t explore whether goofy posts could enhance our “warmth” in the eyes of others, another important factor in how we’re viewed.

The research grew out of John’s interest in how privacy is affected by the permanence of the internet, and how users might navigate new wrinkles in our communications and relationships. There are multiple cases, she said, of people posting things they intend for a narrow audience and then getting in trouble — even fired — when they are viewed more broadly. In this day and age, momentary lapses in judgment can cause lasting harm. For example, 93 percent of hiring managers say that they check job candidates’ social media presence before making a decision, the study said.

“We all have digital skeletons in our closet that can come back to bite us,” John said. “It feels fleeting when we disclose, but digital disclosure is one of the most permanent kinds of disclosure.”

The moral of the story, she said, is that “temporary” shouldn’t be an excuse to not think hard about what you want others to see.