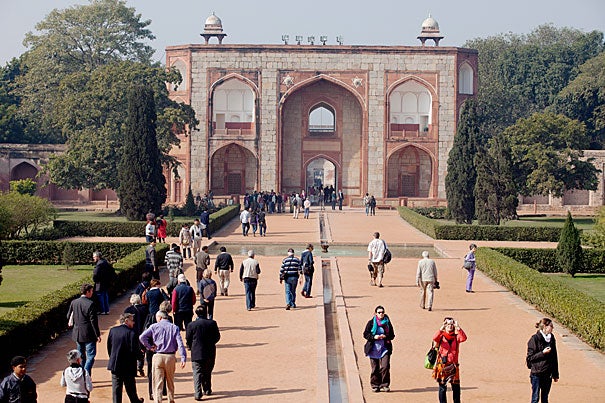 With a daughter just a week old, Sunil Amrith had good reason to be awake before dawn on Wednesday.

But the early morning hours turned especially lively — and joyous — when the MacArthur Foundation listed the Harvard historian among this year’s 24 “Genius” Grant recipients.

“Honored and delighted to be a #MacFellow — and still in shock!” Amrith tweeted at 6:53 a.m.

The prestigious fellowship recognizes “exceptional creativity” with a $625,000 award. The money will allow the 38-year-old scholar to pursue his ideas and activities with full freedom.

“The real difference it will make is that it will make the projects that were somewhere in the dream category possible, the ones that don’t neatly fit into a research grant application but nevertheless bring out other dimensions of the issues I am passionate about,” said Amrith, the Mehra Family Professor of South Asian Studies and a professor of history. “The no-strings-attached element gives an even heightened sense of responsibility of needing to do something good with it.”

The Kenya-born Amrith, who left the University of London for Harvard two years ago, is on sabbatical while finishing a book called “Unruly Waters,” about historical effects of the Indian monsoon on culture, politics, and economics in the context of climate change.

Shortly before coming to Cambridge, Amrith published “Crossing the Bay of Bengal: The Furies of Nature and the Fortunes of Migrants,” research that focused on migration in South and Southeast Asia.

“I’ve long been interested in working with documentary film,” he said. “The MacArthur is an encouragement to work in different media and with new people, to bring a new dimension to the work I’m doing.”

“To have two of these in a year is insane. It’s a lifetime’s good fortune and then some,” he said.

But luck had little to do with Amrith’s recognition, said Dean of Arts and Humanities Robin Kelsey.

“Sunil’s colleagues already knew that he was a genius, but it is wonderful to see his scholarship receive this recognition and support,” Kelsey said.

Amrith, an amateur pianist, said he was “flabbergasted” to be on a list with the likes of Sorey, a composer-percussionist he has admired for years.

“Funnily enough, the main way I’ve know about these awards is through a lot of the jazz musicians I love,” he said.

While he spent most of the day fielding interview requests and congratulatory calls, Amrith said that formally celebrating the honor would have to wait.

“Between the award and the birth of Lydia, it’s certainly made for quite a dramatic week.”