And the award goes to Elton 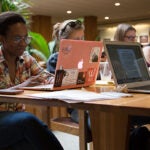 John named Gomes Humanitarian of the Year, will speak at Nov. 6 ceremony

John will deliver the Peter J. Gomes Humanitarian Lecture as part of the awards ceremony, scheduled for Monday, Nov. 6, at 4 p.m. in Sanders Theatre in Memorial Hall. Harvard identification or press credentials will be required for priority distribution of the free tickets to the event, though some may be available to the public.

John has received wide acclaim for his humanitarian efforts to fund and raise awareness about the prevention and treatment of HIV/AIDS, and he has long supported the rights of all people affected by the AIDS epidemic. In 1992, he established the Elton John AIDS Foundation, which to date has raised more than $385 million to support HIV/AIDS-related programs around the world. His philanthropic endeavors were recognized by Britain’s Queen Elizabeth II, who knighted him in 1998.

John has had a celebrated career spanning almost half a century. His many awards and accolades include a best original song Academy Award for “Can You Feel the Love Tonight” from “The Lion King,” and a best original music score award for “Aida.” He has won five Grammy Awards. He was inducted into the Rock and Roll Hall of Fame in 1994, and into the Songwriters Hall of Fame in 1992. He was the recipient of a Kennedy Center Honor in 2004.

Tickets will be made available to Harvard ID holders beginning at noon on Thursday, Nov. 2, and to the public on Friday, Nov. 3. The tickets will be distributed at Sanders Theatre. More information will be available at www.boxoffice.harvard.edu