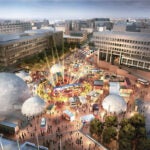 Du Bois Medal recipients look to a better future, but one that requires commitment

With words of hope and rousing calls to action, the fifth annual W.E.B. Du Bois Medals ceremony brought the stars to Sanders Theatre on Wednesday.

The ceremony opened with a performance by the Kuumba Singers student group, a benediction by the Rev. Jonathan Walton, the Plummer Professor of Christian Morals and Pusey Minister in the Memorial Church, and remarks by Glenn H. Hutchins, whose family foundation has strongly supported the center.

Henry Louis Gates Jr., the center’s director and the Alphonse Fletcher Jr. University Professor, welcomed the audience by evoking the spirit of Du Bois, Class of 1890, the groundbreaking sociologist, author, and Civil Rights activist. Gates called on the capacity crowd to “draw a line in the sand, as they did 60 years ago in Little Rock.”

Introducing Walker, Martha Tedeschi, the Elizabeth and John Moors Cabot Director of the Harvard Art Museums, discussed the interaction of activism and art that informs Walker’s work. During a slideshow that traced Walker’s career from her early silhouettes through the monumental “A Subtlety” installation sculpted of sugar, Tedeschi announced that the museum had acquired a wall-size piece from Walker’s current New York gallery show.

Walker, who acknowledged her reputation for saying a lot on paper rather than in person, simply thanked the center for the honor.

Recognizing Thompson, Michael D. Smith, the Edgerly Family Dean of the Faculty of Arts and Sciences and John H. Finley Jr. Professor of Engineering and Applied Sciences, discussed the Microsoft’s leader’s patience and perseverance. Smith paraphrased Thompson’s belief that companies that lack diversity cannot meet the public’s needs. Thompson himself, the only person to hold the title of CEO besides company founder Bill Gates, offered a simple statement of thanks.

Brazile made more use of the podium. Following her introduction by Douglas Elmendorf, dean of the Kennedy School and the Don K. Price Professor of Public Policy, the longtime Democratic operative launched into a fiery speech that ranged from her past working for presidential candidate Al Gore to the future. Returning repeatedly to the primacy of voting, she stressed the importance of voter registration and outreach.

Carla Hayden, the 14th librarian of Congress and both the first African-American and first woman to hold the post, was hailed for her earlier work in Baltimore. There, during a period of urban unrest, she kept libraries open as “a place of sanctuary and healing,” said presenter Sarah Thomas, vice president of the Harvard Library and the Roy E. Larsen Librarian for the Faculty of Arts and Sciences. Hayden, who cited her grandmother and mother’s joy in libraries, called the award “a wonderful honor for a person who loves books and reading.”

Emmanuel K. Akyeampong, Oppenheimer Faculty Director of the Harvard University Center for African Studies, remembered Oppenheimer, the philanthropist and activist who died in May, as a “zealous supporter of educational opportunity and a lifelong learner.” Oppenheimer’s husband, Jonathon, accepted the award. “This work is never finished,” he said. “And I commit with Jennifer in her memory to carrying it on.”

Harvard President Drew Faust then spoke about Darren Walker, highlighting his faith and clarity. Calling his work with the Ford Foundation “extraordinary and transformative,” she praised his “clear-eyed and hopeful vision of America.” On that theme, Walker discussed the importance of hope. He said that while “it is easy to be dejected and demoralized,” hope is vital because “a society that is hopeless will do desperate things.” He pledged to fight for “an America that lives up to its ideals, that lives up to its promise to its people.”

Diane Paulus, the Terrie and Bradley Bloom Artistic Director of the American Repertory Theater, could simply have listed all the firsts of the next honoree, DuVernay, who was the first black woman to be nominated for an Emmy for directing as well as the first to helm a $100 million movie. But she also spoke of DuVernay as a different kind of groundbreaker, someone who didn’t want to “break down the door” but rather “to build her own house.”

Paulus’ introduction was followed by a short film compilation of DuVernay at work, with clips of such films as “Selma,” and ending with a trailer for her upcoming adaptation of “A Wrinkle in Time” that had the audience cheering.

DuVernay praised her fellow honorees, citing her librarian sister Gina and the importance of LL Cool J’s music to her teenage self. Turning briefly to her own work, she noted the importance of film, television, and mass media. “Images affect the way we see ourselves,” she said. “We have to protect them.”

Marcyliena Morgan, professor of African American studies and director of the Hiphop Archive & Research Institute, showed her familiarity with LL Cool J’s work, referencing the rapper, actor, and educator’s mega-hit “Mama Said Knock You Out.” He acknowledged her tribute to him as an educator, revealing how important books and lifelong education are to him. He closed the speaking portion of the ceremony (a closing benediction and more music would follow) with a final call to action.