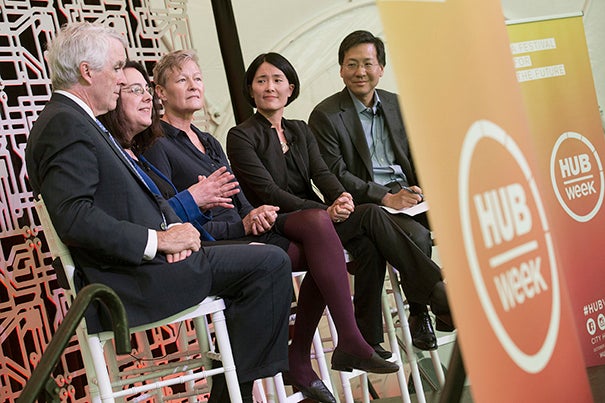 Doctors and nurses operate amid a blizzard of new information that can save the lives of people who not long ago would have died. The challenge? Keeping it all straight.

Atul Gawande, a Harvard professor and surgeon and New Yorker staff writer, illuminated the problem by recalling a letter he received five years ago from a Texas man who was in a head-on collision at 70 miles an hour. The injuries were severe enough that years ago they might have killed the man, Gawande said. Instead, emergency responders were on the scene within minutes. Within a few more, the man was in a helicopter to a major hospital, where his spleen was removed, the bleeding was stopped, and his condition stabilized.

From there, Gawande said, the patient had to endure months of treatments addressing different injuries, but in time he got on with his life. That is, until he went to the beach one day and contracted an infection.

The spleen can be important in fighting certain infections, Gawande noted. That’s why patients who have it removed typically are given three post-procedure vaccinations. In this case, the man received only two. The third would have protected him from the bug he picked up at the beach. The man lost his feet, fingers, and nose. Then he lost his job and his ability to take care of his family.

‘We love rescue and the heroism of being able to save someone. The death that didn’t happen is invisible.’ — Atul Gawande

The incident was awful, but not isolated, said Gawande. He remembers one case at Brigham and Women’s Hospital in which the patient died. What’s needed, he said, are simple systems to help, such as the surgical checklist he developed at Ariadne Labs, which he founded and which is a joint center of the Brigham and the Harvard T.H. Chan School of Public Health.

Checklists, smartphone apps, or other interventions are penicillin-like in their life-saving potential,  said Gawande, who spoke Friday at Faneuil Hall as part of HUBweek. His checklist takes aim at preventable surgical deaths, the estimated cause of as many as half of all surgery-related deaths. Recently published research on a checklist trial in South Carolina hospitals showed a reduction of 22 percent of all surgical deaths.

Though the systems can potentially save many lives, Gawande, in response to questions from author Malcolm Gladwell, said that they get little attention. Further, they meet resistance from a significant minority of doctors who feel they don’t need them.

It’s perhaps telling, Gawande said, that of the 25 percent of surgeons who said in a recent survey that the checklists were too long and unnecessary, 95 percent said that if they were having surgery, they’d want all the items on the checklist performed.

Gawande and Gladwell discussed whether the problem was related to heroism — or its lack. People get excited about saving someone who’s hurt, which is one reason surgeons are held in such high regard and demand such high salaries. There’s nothing dramatic about an injury that’s headed off, he noted, so even though the statistics tell of a life-saving impact, the work often goes unnoticed.

“We love rescue and the heroism of being able to save someone,” Gawande said. “The death that didn’t happen is invisible.”