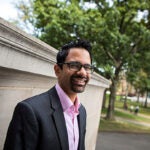 Co-founder of Council on American Islamic Relations to give keynote

Founded in 1904, the Phillips Brooks House Association (PBHA) is a student-led nonprofit at Harvard College that engages 1,400 students in 83 social service and social action programs that benefit approximately 10,000 low-income people in Boston and Cambridge.

Its Robert Coles “Call of Service” Lecture and Award brings a significant leader in public service to Harvard each fall to inspire a deeper engagement with critical social issues on campus and in the wider community. Previous speakers and award recipients include former vice president and environmental activist Al Gore ’69; president and founder of the Children’s Defense Fund, Marian Wright Edelman; Civil Rights activist Bob Moses; co-founder of #BlackLivesMatter Alicia Garza; and recently TransGriot founding editor Monica Roberts. Established in 2007, this annual lecture and award honors former PBHA volunteer, trustee, and longtime Harvard faculty member Robert Coles ’50 and his book “The Call of Service,” which examines the idealism PBHA seeks to instill in students. Coles is expected to attend the event, which is from 6:30 to 8 p.m. Nov. 3 at the Memorial Church.

Awad is the national executive director of CAIR, the largest and most prominent civil liberties and advocacy organization serving the Muslim community in the United States. Awad has led multiple campaigns to defend the rights of Muslims and help Americans of other faiths better understand Islam.

Awad has testified before both houses of the U.S. Congress on matters involving Muslims in America. In 1997, he served on the White House Civil Rights Advisory Panel to the Commission on Aviation Safety and Security. In 2004, the National Journal named him one of the most influential people in the U.S., whose ideas will help shape the debate over public policy issues for the next decade. In 2012, a Georgetown University publication named him one of the 500 most influential Muslims in the world. In 2010, Arabian Business ranked him 39th in the “Arabian Business Power 100,” its annual listing of the most influential Arabs. In 2015, The Los Angeles Times named Nihad one of the new civil rights leaders. Awad has been frequently interviewed on national and international media such as CNN, Fox, MSNBC, PBS, C-SPAN, Al-Jazeera, The New York Times, The Washington Post, USA Today, National Public Radio, and BBC World Service.

Awad is a leading advocate for justice and mutual understanding, promoting dialogue and empowering American Muslims. PBHA will honor his lifetime service and continued efforts to encourage dialogue and build coalitions.

The lecture and award precede the PBHA’s annual Alumni Weekend, in which PBHA alumni reconnect and talk with current PBHA undergraduates. Each year an outstanding alumnus and supporter are honored at the annual luncheon. This year, however, the PBHA will honor its directors of programs Robert Bridgeman and David Dance, who are retiring after 24 years and 15 years, respectively. Bridgeman and Dance work in and out of the building with students and communities.

The Robert Coles “Call of Service” Lecture and Award is free and open to the public. For more information on the events, visit the PBHA website.