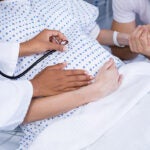 At a Harvard-sponsored panel Thursday at Boston City Hall Plaza, a group of top doctors and researchers discussed some remarkable developments in cancer treatment.

The panel, “Deep Dive: Voices of Oncology Discovery,” was co-sponsored by Harvard University and HMS in partnership with The Boston Globe, Massachusetts General Hospital (MGH), and Bristol-Myers Squibb Co. It was presented as part of HUBweek, a series of panels and discussions designed to spotlight innovation.

One panelist shared d a dramatic success story for targeted therapy. Linnea Olson, a local artist and blogger, became ill with non-small-cell lung cancer in 2005. Initially she was misdiagnosed with asthma and her cancer progressed for two years before she sought new treatment. A fortunate connection brought her to MGH, where she met Thomas Lynch Jr., now the chief scientific officer at Bristol-Myers Squibb.

Lynch picked up the story from there.

“At the time our treatment of lung cancer was based on chemotherapy which helped patients live longer, but didn’t give the dramatic results we were looking for,” he said.

But a new possibility existed in the form of drugs inhibiting EGFR, a protein involved in cancer growth. The drugs were most effective in patients whose EGFR displayed a particular genetic mutation. Given the unusual nature of Olson’s case — she was relatively young, at 45, and a nonsmoker — Lynch thought she fit the profile of a patient who might respond to the treatment.

Early results were not promising, and Olson was told she had only a few months to live. But Lynch then learned of a new clinical trial in patients whose lung cancer contained a mutation in the ALK gene, which Olson’s tumor had tested positive for.  The new therapy, crizotinib, was approved by the FDA soon after; Olson was only the fourth patient in the world to receive it. 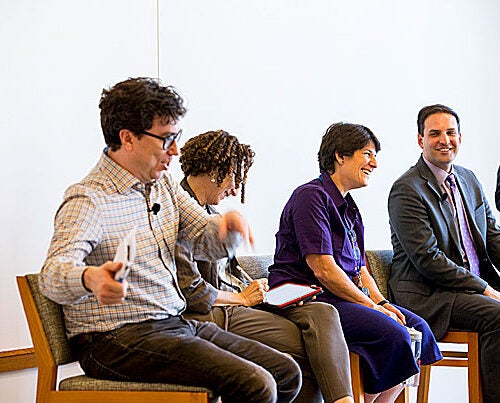 “I started feeling better within days,” Olson said. “When I came back after my next scan, Tom was grinning from ear to ear. He said, ‘This is the best news I’ve given any patient in months.’”

Insights from immuno-oncology research hold promise for the treatment of other disease, the experts said. Cancer immunotherapies work by modulating pathways that normally keep the brakes on the immune system to prevent the body from attacking itself, a phenomenon known as autoimmunity. Cancer immunotherapies block these pathways and take the brakes off the immune system.

“There is unrealized potential for modulating these same pathways to apply these brakes and develop therapies for autoimmune diseases like rheumatoid arthritis and inflammatory diseases like Crohn’s disease,” said Arlene Sharpe, George Fabyan Professor of Comparative Pathology and co-director of the Evergrande Center for Immunologic Diseases at HMS.

While Olson’s story was inspiring, the panel also addressed pitfalls and challenges in cancer advances. A major one is that most patients become resistant to the drugs that initially control their disease, making it imperative that new and stronger treatments emerge. Olson, a 12-year survivor, said that she is now on her third course of treatment.

“Acquired resistance is tremendously important,” said Alice Shaw, associate professor of medicine at HMS and Paula O’Keeffe Endowed Chair of Thoracic Oncology at MGH. “Maybe 20 percent of patients with lung cancer will have mutations in EGFR, ALK or other genes, making them good candidates for targeted therapies. But they typically start to develop resistance within 24 months. We need to understand that resistance in order to identify new treatments that are effective in resistant patients, as we did in Linnea’s case.”

Lynch pointed out the need to fast-track promising drugs. The four-year period crizotinib needed was relatively fast, but “some patients don’t have the four years to wait.”

After the panel discussion, an audience member asked about cost of treatment. Olson noted that she was fortunate to have health care, because her treatment would have come to around $14,000 per month. For those without coverage the options are less clear, a problem Lynch addressed as a pharmaceutical executive.

“The industry needs to show that we are providing value,” he said. “You’re either helping people live longer or live better, and you have to be doing that in a way that can be afforded by the resources of the country you’re working in. The balance of value will be the great challenge for the industry as we move forward.”