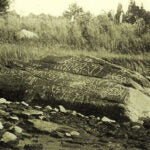 The vision of Andy Warhol is unmistakable: pop culture reimagined and reinvented as vibrant art. Among the boldest work in his oeuvre is a series of large-scale, multicolored prints of Marilyn Monroe, and for the next few weeks, visitors to the Harvard Art Museums can see many of those images together, up close.

To complement to the American Repertory Theater’s “WARHOLCAPOTE,” a new show based on a series of taped conversations between Warhol and author Truman Capote, the museums’ Art Study Center will display a series of 10 prints from Warhol’s “Marilyn Monroe” portfolio. The series, along with the original cardboard box they came in, was given to the museums in 2015 by Michael F. Marmor ’62, M.D. ’66, and Jane B. Marmor, M.D. ’66.

“To have the whole portfolio of these screen prints in their original box is amazing,” said Mary Schneider Enriquez, the Houghton Associate Curator of Modern and Contemporary Art, who helped organize the Monday showings. “Other people may have a single Marilyn Monroe print or a couple, but having the entire series is incredibly exciting. We can measure the whole range of tonalities all at once. It’s almost as if you are getting a little bit of Andy Warhol directly.”

The show features six prints at a time, offering visitors a sense of their collective range and power, said Enriquez. Viewers of the images, each measuring 36 by 36 inches, will be struck not only by their size, she said, but also by the ways in which Warhol’s color choices dramatically alter how one sees his famous subject.

That coloring, be it a pop of fluorescent blue or muted tones of gray, transforms the repeating image of Monroe’s hooded eyes, plump lips, glamorous waves, and classic beauty mark into something nuanced and complex.

“The difference in the way the beauty mark appears in each of these because of the coloring makes you see her face in a different way and makes you read her and who she was in a different way, a way I admit I didn’t expect,” said Enriquez. “It wasn’t until I had time seeing them all together that I began to see them not as some kind of play on the advertising industry and all the things that Warhol gets credit for, but for this real complexity there.”

The artist’s decision to focus on Monroe points to his own understanding of the darker side of fame, she added.

“Monroe in many ways epitomized a lot of the iconic status he liked to focus on as a figurehead in popular culture. But I as I thought more about it, Monroe, like Warhol himself, was self-created and then became consumed by others. … He became what others decided he was at a certain point, and they certainly did that with her.”

Still, Warhol is “a touchpoint in 20th-century art that endures,” said Enriquez. For the next three weeks at the Harvard Art Museums, visitors will be able to see some of that enduring legacy for themselves.

“WARHOLCAPOTE” will be at the American Repertory Theater through Oct. 13. Enriquez and visual artist Jesse Aron Green will take part in a post-performance discussion on Oct. 4.