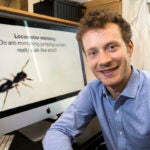 Schools are back in session, and students are back in their local cafeterias, where the foods that they pick or pack from home can directly affect their academic performance, according to a nutrition expert at the Harvard T.H. Chan School of Public Health.

Cohen said cafeteria food has improved greatly since she was a child, but there are still ways it could get better. The Gazette spoke with her to get a better sense of how modern school cafeterias are changing, and how that’s a good development for schoolchildren.

GAZETTE: How important are school meals to a child’s overall nutrition?

COHEN: School meals are incredibly important. Many children rely on school meals for up to half their energy intake every day throughout the school year. Lunch is a time for students to learn what healthier foods are, and to be exposed to new foods. Research, including our own, suggests that healthier foods are directly associated with improved cognitive functioning, including working memory, attention, planning, and inhibitory control, which is related to academic success. The whole school day is a time to learn, and that includes inside the cafeteria.

GAZETTE: What do you remember of your own school lunches, and how good a job did your parents do in light of what you know today?

COHEN: I grew up living on school meals, and I think I may be one of the few who absolutely loved them. It was really nice having a warm, hot meal every day, but I definitely remember it being a lot of chicken nuggets and French fries and pizza.

GAZETTE: How do those chicken nuggets you had as a kid fit into a healthy diet, versus what schools are serving today?

COHEN: School meals have come a long way since I used to eat them. With the updated school meal standards, they’re now serving more whole grains, greater vegetable varieties, and more fruit. It’s substantially healthier than what I was served as a child.

GAZETTE: You haven’t mentioned obesity. Is that a factor in school meals, or do kids get those surplus calories elsewhere?

COHEN: School meals now have requirements regarding both the minimum and maximum number of calories. Additionally, some of our newest research suggests that students may consume less after school when they eat a healthier school meal, so school lunches can potentially play an important role in addressing the high obesity rates among children. The military has generally supported the healthier school meal standards because many young adults are currently rejected for service due to their weight. In fact, the school meal system came about as a measure of national security because so many people were rejected from the draft during World War II due to poor nutrition.

GAZETTE: Your research really touches on a broad spectrum of issues dealing with school meals: executive functioning, the amount of time for lunch, the availability of water. What’s the most important issue in school lunches today?

COHEN: The primary issue is really around taste. Kids eat what tastes good. Our research suggests that if you improve the taste, such as by collaborating with professional chefs, that makes significant improvements in the amount of school lunch that kids are eating. This is especially true in regard to vegetables and the healthier entrees. Food waste is a big concern in schools, but it’s important to note this was an issue before they updated the school meal guidelines. Rather than rolling back the healthier food standards, we should focus on further improving the quality and taste of the healthier school lunches.

Equally important, our research shows that the amount of time that kids have to eat also plays an important role in how much they consume. We’ve found that children need at least a 30-minute lunch period, because the amount of seated time they end up having to eat in is often substantially lower. In our study, we had some kids with 20-minute lunch periods who had as little as 10 minutes to actually eat their meals, so policies that enable children to have a sufficient amount of time to eat can make an important difference in consumption rates.

GAZETTE: Are school vending machines an issue? I know they were in the past, and some schools have taken steps to address that.

COHEN: Massachusetts was actually ahead of the curve and passed legislation requiring healthier competitive foods standards, beginning in 2012. “Competitive foods” are the snacks sold in schools that compete with school meals, such as in vending machines and school stores. The federal “Smart Snacks” standards, which improved the quality of competitive foods nationwide, were not fully implemented until last year. Our research suggests that while kids are not buying as many of the healthier snacks, they are purchasing more school meals. So overall this is really a win for the schools and for children.

GAZETTE: What about people who bring their lunches from home? Are the peanut butter and jelly sandwich and baloney and cheese one still approved parts of the diet, or should parents move on from them as well?

COHEN: There is no one-size-fits-all solution. Parents should focus on foods that will enable their child to feel full and perform their best in school. Research suggests those helpful foods are whole grains, vegetables, fruits, lean proteins, and water or milk without added sugar. A peanut butter sandwich, where still allowed in schools, along with a fruit and vegetable, can be a great option for kids. Processed meats, like on that baloney sandwich, may, however, be associated with poorer cognitive functioning.

GAZETTE: Schools sometimes, on mornings of standardized tests like Massachusetts’ MCAS, strongly recommend children have a good, hearty breakfast — at least that’s what my kids tell me. Does your research show a direct cause and effect between diet and cognition on the same day, or is it more that a healthy diet over a long period of time promotes higher cognitive functioning?

COHEN: Research suggests schools need to focus more on the long-term benefits of a healthier diet. Schools are correct in recognizing the importance of healthier meals, but it is not enough on just MCAS testing days. We need to ensure that children have the opportunity to have a healthy breakfast and lunch every day if we really want them to perform at their best.

GAZETTE: To what extent do you think it’s the schools’ responsibility to make sure kids eat healthily?

COHEN: The role of schools is to educate students. And I believe not only providing students with healthy food options, but also teaching them how to identify and make healthy choices in the future, is part of that learning experience.

GAZETTE: What are the remaining issues to be addressed in the diet of children during the school day? It sounds like we’ve made some good progress.

COHEN: We’ve definitely made great progress. Currently, the biggest issue is ensuring that the standards are not rolled back. Cafeteria staff work so hard to feed the pickiest eaters in America every day throughout the school year, and we need to give them all the resources they need to provide kids with the best-tasting foods possible. We’ve found that collaborations with professional chefs can help with this difficult task as well. Our research suggests that children are already eating the healthier school meals, and providing additional support for school cafeterias can help ensure children eat even more of these meals.

GAZETTE: How would a collaboration with a chef work? Would a chef come to a school one day a month, or is the impact higher up in the distribution chain, where the chef gives input for the prepared foods going to the schools? How do you envision that working?

COHEN: We’ve seen chefs play roles in many different ways. While there have been some schools that have worked with a chef who has volunteered for a brief amount of time, other school districts have hired a professional chef as a permanent position to work with the staff to improve their culinary skill sets, create new recipes, and even help with inventory control, which can end up saving schools money.

GAZETTE: Is there a particular age group that should be targeted, perhaps the hardest group to reach, or should efforts really be broadly targeted at K through 12?

COHEN: It would be best to have children exposed to healthier foods as young as possible, ideally starting even before kindergarten, such as in preschool programs like Head Start. We know now that it often takes multiple exposures — sometimes 10 or more exposures — to a healthy food before a child likes it, and the earlier we can provide opportunities for children to try these healthier foods, the easier it will be for them to make lifelong healthier food choices.

GAZETTE: What’s the most important thing for parents to know on this subject?

COHEN: Don’t give up because a child initially rejects a healthier food, including from school lunches. Our research shows that with repeated exposures, children often learn to like these new foods. And with the updated school meal standards, school meals really can be a healthy option.