Echoes of Capote and Warhol 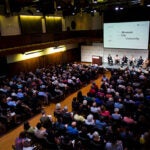 Museum leaders have more than just art on their minds

In new A.R.T. play, a voice coach helps connect how the artists sounded then to the staging of their friendship now

They are two late 20th-century pop-culture icons renowned for their artistic and narrative flair. But in a video age, something else also set them apart: their distinct, well-known speaking styles.

The icons are Andy Warhol and Truman Capote. The new play “WARHOLCAPOTE” by Rob Roth at the American Repertory Theater (A.R.T.) draws from 75 hours of taped conversations that the two men had in the 1970s in which they discussed everything from the trials of fame to, in a case of life mirroring art, creating their own play based on their talks.

The challenge for any actor is how to capture the character he or she portrays. Often that process begins with mastering the voice. Meeting that challenge at the A.R.T. is Erika Bailey, the theater’s vocal coach, who guides actors through breathing exercises and accents and teaches techniques that help them preserve their voices from the strain of nightly performances.

To prepare actors properly, Bailey starts with research, with this play a more complex concern than usual because the public images of both Capote and Warhol were shaped in part by how they sounded. For “WARHOLCAPOTE,” which plays through Oct, 13, Bailey turned to taped interviews of each artist. To grasp Warhol’s speaking style, she focused on a series of interviews the artist had with gossip columnist R. Couri Hay, and one particular exchange between Warhol and writer William Burroughs, in which the two chatted over dinner.

“That gave us some good insights into him in a more relaxed place, in a more enthusiastic place, and what happens to his voice in those environments,” said Bailey, who holds a master’s degree in voice studies from London’s Central School of Voice and Drama.

Capote was a regular on television talk shows — where he was sometimes sober, sometimes not. But even watching and listening to the author under the influence of alcohol was informative, said Bailey, and offered a look at what Capote was like “in a more emotional and less controlled place.”

Capote grew up in Alabama and had a distinct Southern accent. He also had a lisp. Working with Leslie Jordan (who, because of personal issues, was replaced by Dan Butler just before previews), Bailey explored that Southern dialect, as well as ways to help Jordan introduce a speech impediment into his lines. She helped him think about not “working the tongue in a really detailed way,” to make certain words sound “a little slushy.”

While Warhol lacked a distinct accent, what he did have was “a stillness to his face, a lack of expressivity” when he was speaking, said Bailey. “One very simple thing we’ve been working on is he doesn’t round his lips … we’ve been working on sort of stilling some muscular effort for some vowels.”

That may sound simple, but it’s anything but, according to Tony Award-winning actor Stephen Spinella, who plays Warhol in the 75-minute, two-man show.

“The way his voice is constructed is it’s back in his mouth and a little high through his nose, but at the same time swallowed,” said Spinella, adding that Warhol routinely dropped his Rs and hardly opened his mouth to speak. “The jaw barely moves. The lips don’t round at the corner.”

That stillness takes a toll on an actor.

“There were times where my jaw would just ache at the end of rehearsal because it just never got the relaxation of being stretched and open,” Spinella recalled.

Still, Spinella acknowledged that for a man who didn’t move his mouth much when he talked, Warhol’s speech was filled with emotion.

“It’s sort of this strange place in the voice where he sits on his emotion, his heartbreak. You can kind of hear it in the voice, but it’s not expressed. He doesn’t allow it to be expressed. That was another thing that is kind of surprising and in keeping in a sad way with his reputation of having very little affect.”

Bailey, Spinella, and Roth agree that they aren’t trying to bring Warhol or Capote back to life onstage. Instead, their aim and that of the play is to help viewers “really get to know them,” said Roth.

“The play, literally every word of it, is from their mouths. There’s a level of intelligence that’s compelling, and I think the audience will think so too.”

The actors’ dedication is winning over audiences. When Butler, who used a script during early performances as he worked to master the new role, realized that a page of dialogue was missing, Spinella rose from his chair, calmly walked to the prompter, and asked for the missing page, as Warhol.
The crowd went wild.

Even when he’s not performing, Spinella said that talking like Warhol can be hard to shake. On a brief break from rehearsals, a friend pointed to him and said “Oh, my God, stop,” as Spinella made a series of comments in Warhol’s voice. He’s not alone. Even members of the backstage crew “now do Andy,” Spinella said, adding, “He’s infectious.”

For ticket and background information, contact the A.R.T. box office.