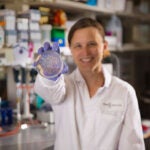 Why are we here?

For philosophers, the question deals with the search for meaning. But for biologists, it’s about something else — how humans, as a species, have managed to stick around for as long as we have.

Mashaal Sohail may soon have an answer — for biologists, at least.

A Ph.D. student in systems biology and a graduate student in the history of science at the Graduate School of Arts and Sciences, Sohail is the lead author of a new study that suggests a process known as synergistic epistasis enables humans to survive with an unusually high mutation rate. The study, recently described in Science, is from the lab of Harvard Medical School’s Shamil Sunyaev.

“For humans, the mutation rate is as many as 70 new mutations per genome per generation,” Sohail said. “That’s important, because although mutations are a source of novelty, many of them may be damaging. Since the 1950s, the question has been how do we maintain such a high mutation rate, because if damaging mutations persist, they would normally kill off a population in a few generations.”

Among the most widely held theories of how humans survive with such a high mutation rate, Sohail said, is synergistic epistasis — the idea that different parts of the genome can interact.

Though some mutations may cancel out others, the theory posits that damaging mutations can have a synergistic impact, meaning each new mutation has a larger damaging effect than the previous one. But what sounds like a problem actually turns out to be beneficial.

“So they become an evolutionary dead end in some sense,” Sohail said. “It’s obviously bad for the individual, but it’s good for the population [because] you can get rid of multiple damaging mutations at once.”

Using data from the Genome of the Netherlands project, Sohail and colleagues from Moscow State University and University Medical Center Utrecht in the Netherlands were able to study the genomes of hundreds of healthy individuals and graph how many mutations each carried.

“What we’re looking for is whether there is a significant depletion of individuals with a very high number of damaging mutations,” she said. “The effect is small — if only about 2 percent of the population is selected out in this way, it produces the depletion that we see.”

Similar results were found using genetic data from other populations, and were even demonstrated using fruit flies, suggesting that the synergistic epistasis theory is correct for the most damaging mutations. It is still too early, Sohail said, to say whether the theory may also work for less-damaging mutations.

The study may also help answer another key evolutionary biology question by lending credence to the theory that sexual reproduction evolves to help populations deal with high mutation rates.

“There is a cost that comes with it, because sexual reproduction passes only half a genome to the next generation,” Sohail said. “The speculation has always been that sex must have an evolutionary advantage, otherwise it should disappear.”

The genetic mixing that occurs during sexual reproduction helps bring mutations together on the same genome. This allows epistasis to then help rid a population of damaging mutations.

“This gives evidence to support what has been called the deterministic theory of the evolution of sexual reproduction,” she said. “Sex had to come about in a population with such a high mutation rate because it’s too high to sustain otherwise.”

Ultimately, the study shows how humans have walked an evolutionary fine line by maintaining a mutation rate high enough for our development without wiping us out as a species.

“Mutations are the fuel of evolution,” Sohail said. “This is a story about damaging mutations, but I think another way to think about this is related to evolvability … because you want a high rate, but you also want to be able to sustain it without killing the population.”

This research was supported with funding from the National Institutes of Health and the Russian Science Foundation.