Messud on the makings of her ‘Burning Girl’ 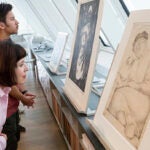 Frida the artist before Frida the icon

Novelist Claire Messud writes about early adolescence in her new book, “The Burning Girl,” capturing both the joy and pain of middle school, when awkwardness reigns and friends can suddenly become strangers. The author of several works of fiction, including “The Emperor’s Children” and “The Woman Upstairs,” Messud is a senior lecturer in the English Department and host of the Writers Speak series at the Mahindra Humanities Center.

GAZETTE:  You cite Louise Glück’s poem “Midsummer” as an inspiration for “The Burning Girl.” What about it?

MESSUD: It is, for me, a very evocative poem. I met Louise for the first time not long after reading it, and we had a conversation about it. It’s been alive in my consciousness for a long time. A lot of elements came together as I was beginning this book, but, as a writer, characters are central for me, and one thing I can’t do without is place. People are who they are because of where they are and where they were before. It wasn’t that I sat down and had in mind the setting of Louise’s poem. I realized, after I wrote the first draft of the first section, that my reading of her poem was informed by my experiences of quarries, growing up in Ontario.

GAZETTE: “The Burning Girl” is about making your way out of childhood and friendship, specifically as a girl. What is so captivating about this time for you?

MESSUD: All my adult life, when encountering a challenging situation and feeling intimidated or uncomfortable, I whisper to myself, “Picture everybody in middle school.” It’s the crucible in which we are formed. It’s not that childhood and adolescence are separate, but there is some identity that forms during that period; we are marked by it. When you encounter people who had a really great time at that age — there are very few — often what follows is, for them, disappointment. Those for whom it was difficult, we learn so much about being human. As young people, we know so much more than we can articulate; we have more knowledge than we can often say. And watching this experience, living through it again as a parent — I have a daughter who is 16 and a son in eighth grade — has given me a different perspective.

GAZETTE: Does that parenting lens give you distance, or is it just as difficult to watch your child navigate these years as it was to go through them yourself?

MESSUD: I can resurrect shame and embarrassment from my own adolescent years that still make me blush — it’s very intense. When you are living through it, that’s simply what you experience. When you are witness to it as a parent, part of your response is rage and part is impotence. The worst thing you can do is to try to take it on for your child; you just have to be a witness and offer support, and tell your kid it doesn’t matter.

GAZETTE: An underlying storyline is about the defining moments when friendships change, though they can’t often be pinpointed. How did you make sense enough of it to write about it?

MESSUD: I think it does happen to boys slightly differently, but it happens to all kids. Friendships change and I couldn’t have told you why at the time mine did. Sometimes it’s literally physical growth. One kid earlier than another is propelled into a different physical space. They don’t want to play with Nerf guns anymore. It’s also the rise of self-consciousness. I think of 9 and 10, even 11, as a halcyon time for girls in particular, when everything seems possible — I’m going to be an astronaut, the president — without their bodies being complicated things. When you reach puberty, it’s a time of great complication. You’ve got to deal with your period, or acne, or boobs. You’re too heavy or too skinny. Your body becomes this mysterious obstacle. That self-consciousness that only a year or two before seemed to offer you the world now tells you that you have no place in it, that you’re not right in all these ways. Hence the obsessive normalizing. The odds of you and your best friend experiencing these changes in the same way seem pretty slight. It’s as unlikely as finding a great therapist the first time.

GAZETTE: With kids and work, how do you write?

MESSUD: Getting a project underway is like getting a plane off the ground. It’s challenging to find the sustained time to get something started. Once the plane’s in the air, it goes faster or slower, but it goes. But getting it off the ground each time, that’s the hardest part. When you’re setting out, you need time to focus only on the work itself. There’s this magpie aspect. You take these different elements — a snippet of conversation, a character, a memory, an idea, a place — and you put them together. With “The Burning Girl,” some core of the story dates from my youth — a kernel that haunted me for years, even before I wrote “The Emperor’s Children.” For a long time, I didn’t have a way in, but living again these adolescent years and being witness to my daughter’s and nieces’ experience of that time, I had more access to the story I wanted to tell. Some of the process involves research. But sometimes, too, life presents you with what you need.