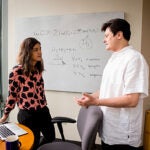 A hundred milliseconds seems impossibly fast, shorter than the blink of an eye, but for a species of jumping spider known as Myrmarachne formicaria, it’s enough time to trick a predator into thinking it’s an ant.

Using high-speed cameras, Harvard researchers have shown that, contrary to widely held belief, the spiders don’t walk on six legs in an attempt to appear more ant-like, but instead walk with all eight but take tiny, 100-millisecond pauses to lift their front legs to mimic an ant’s antennae. The findings are discussed in a paper recently published in the Proceedings of the Royal Society B.

“One thing that’s really remarkable about these spiders is, if you look at them closely, they don’t really look like ants,” said Paul Shamble, now a John Harvard Distinguished Science Fellow, who conducted the research as part of his Ph.D. thesis at Cornell University. “But when you watch them walk, they really look like ants. In general, this paper is about how you can have movement that is or is not ant-like.”

Understanding how the spiders walk and how they mimic ants, Shamble said, was one of the central aims of the study.

Using high-speed video, Shamble was able to capture the jumping spider walking on eight legs, and then lifting its forelegs when stopped (starts at 0:55). Credit: Paul Shamble and Tsevi Beatus/Cohen Lab, Cornell University

“The challenge is how to you turn an eight-legged arachnid into a six-legged insect with antennae,” he said. “What a lot of mimics do is pick up one set of legs and hold them in front of their head, so they look like antennae, but one thing that wasn’t clear was whether these spiders were actually walking on six legs all the time or if they were doing something else.”

The answer came when Shamble and colleagues used high-speed cameras to photograph the spiders.

“What we found is that whenever they’re walking forward, they walk on eight legs, but they have these tiny pauses, where they stop and pick up their front legs,” Shamble said. “And anytime they stop for any serious amount of time, they pick up their front legs. The effect, when you’re watching it, particularly because of how small they are, is that you can’t quite tell what’s going on. And whenever they’re stationary, they look like they have antennae and six legs. So the only time you’re really sure what you’re seeing, it’s a six-legged creature.”

Why do the spiders go to such lengths to convince predators they’re ants?

“Eating ants is a hard game to play,” Shamble said. “Most predators would rather eat other things.” For one thing, many ants produce formic acid, “[S]o they taste terrible. In general, they’re also very aggressive, so if you’re a predator who’s trying to decide what to eat, it makes sense to choose the thing that’s poorly defended.”

With tiny bodies made up largely of exoskeleton, ants offer little in the way of nutrition, meaning predators have to eat large numbers of them to see any dietary benefit. So if the jumping spiders appear to be ants, other predators are less likely to attack them.

“Jumping spiders really like to know where they’re going … so we gave them a totally blank space to wander in,” Shamble said. “What regular spiders do is walk a bit, then stop, then walk some more. But what ant mimics do is weave back and forth, and they hardly stop at all. What we realized is if you draw a pheromone trail for an ant, it’ll tack back and forth across it. So what the spider is doing is a sort of context-specific mimicry. It’s not that the spider perfectly looks like an ant, but it’s doing a very obviously ant-like thing.”

In additional tests, Shamble and colleagues were able to show that the 100-millisecond pauses in the spider’s gait are precisely timed to fool predators.

If they were faster, predators’ visual systems wouldn’t be able to process the information fast enough, eliminating the ant-mimicking effect. If they were any slower, it would be clear the spiders were using their front legs to mimic ant antennae.

The researchers also created simple animations of ants, normal spiders, and the ant-mimic spiders. Those animations were then played on iPhones for predators, with surprising results.

Upon seeing animations of ants and the ant-mimics, the predatory spiders showed no reaction. When they saw normal spiders, however, the predators showed a tendency to leap toward the screen.

“The thing that’s interesting about mimicry [is] for a long time people had this expectation that any mimic should be a perfect reproduction of the creature it was mimicking,” Shamble said. “But it’s only been recently that people have … realized that you don’t need to look exactly like something, you just need to sow the seeds of doubt. The mimicry only has to be good enough to satisfy what you’re worried about.

A predatory spider ignores an animation of the ant-mimic spider, but then attempts to attack an animation of a normal spider. Credit: Paul Shamble and Tsevi Beatus/Hoy Lab, Cornell University