New England is losing 65 acres of forest a day 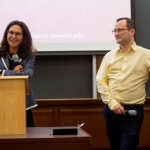 Connecting the dots in data sciences

New England is in danger of squandering its conservation “second chance,” according to the authors of a new Harvard Forest report.

The region, heavily deforested in colonial days, is today one of the most densely wooded in the world, thanks to forests that regenerated over the past 150 years as farms were abandoned for city life.

But that reforestation has peaked, and New England is now losing 65 acres of forest to development each day, the report says. In addition, funding for land conservation has fallen 50 percent since 2008, and the acreage conserved annually is also down, falling more than sixfold since the early 2000s, from 333,000 acres a year to about 50,000 acres a year since 2010.

“Peak forest cover is over in New England,” said Jonathan Thompson, a senior scientist at Harvard Forest and one of the report’s 31 authors. “For more than 150 years, forests expanded and regrew. That history is how we gained the status as among the most populated and most forested regions in the world.”

Thompson said that about 88 percent of New England is forest or farmland, but that development — 50 percent of which is residential — amounts to a “hard, permanent” deforestation that removes the land from natural uses for the foreseeable future.

“If current rates continue, New England will lose another 1.2 million acres by the year 2060 — that’s an area nearly twice as big as Rhode Island,” he said.

While climate change threatens to alter natural communities and favors some species over others, development eliminates ecosystems altogether, Thompson said. In addition, he said, land is our biggest asset in fighting climate change, with growing trees locking up carbon and natural areas buffering the effects.

The report, “Wildlands and Woodlands, Farmlands and Communities,” calls for tripling conservation efforts across the region, with the aim of setting aside 30 million acres of forest covering 70 percent of New England, as well as all of its remaining farmland. Ten percent of the conserved acreage would be set aside as wildland, while the rest would be managed sustainably for wood products and other forest-related benefits.

In order to achieve that level of conservation, the report’s authors call for increased public funding, integrating land conservation with urban and municipal planning, and ensuring that land dedicated for economic development is used as efficiently as possible.

Harvard Forest Director David Foster, the report’s senior author, sees cities and towns as partners in such efforts. He offered the example of former mill towns that have seen redevelopment of industrial buildings, creating desirable residential areas that are near transportation and other infrastructure.

Despite the negative trends noted in the report, Foster said there are reasons for optimism. The region has a long history of support for land conservation, and in recent years regional conservation partnerships have multiplied. State and municipal efforts have also been expanding. For example, the Massachusetts Community Preservation Act allows towns to add a surcharge of up to 3 percent to property taxes and direct the revenue to preservation. The program is voluntary, but 11 towns signed on last year, bringing the total to 173, nearly half the state’s 351 communities.

Another positive factor, Foster said, is that conservation opportunities abound. Conservation organizations are regularly contacted by landowners interested in setting aside land or protecting it from development. The problem, Foster said, is that for many of these individuals, much of the wealth is tied up in the land, which makes the development of innovative programs and identifying new funds important.

“There are more opportunities than we can handle,” Foster said.

Foster noted growing recognition of the benefits of conserving forests, creating opportunities for an array of partnerships — such as with health care organizations that recognize the benefits of natural areas — that may not have been possible in the past.

“The capacity for conservation in New England is unrivaled in the world,” he said. “We know that there are huge emerging opportunities for land protection and we know that when similar opportunities occurred in the past, the states, local municipalities, and conservation organizations collaborated to seize on these.”