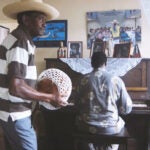 He created the most famous female superhero in history, empowering her to triumph in a male-dominated world, yet he lived together with a wife and a mistress, fathered children with both, and was eager to keep the complex relationship secret. Now a majority of his personal papers are at Harvard.

Over the past academic year, two collections of William Moulton Marston, the Harvard graduate, psychologist, and inventor of the lie detector machine whose Wonder Woman comics promoted the triumph of women, arrived at the Radcliffe Institute for Advanced Study’s Schlesinger Library.

Though there’s little material directly related to Wonder Woman among the photos, letters, articles, drawings, and miscellanea in the archive, the collections go a long way toward explaining the influences in Marston’s life that inspired his righteous crime-fighting character, her racy look, and her fantasy storylines.

“His collection helps tell a back story rooted in Marston’s controversial research and the women in his unorthodox personal life,” said Kathy Jacob, curator of manuscripts at the Schlesinger. That includes Marston’s simultaneous relationships with two strong and idealistic women, a connection to Margaret Sanger ­— one of the most important feminists of the 20th century — as well as Marston’s work with behavioral psychology and his theories on love.

A black-and-white photo from 1914 shows Marston employing his lie detector in Harvard’s Emerson Hall. Years later he would take his systolic blood pressure test to Hollywood to gauge audience reactions to love scenes, and others, for the film industry. In the archives, a series of graphs chart the responses of blondes, redheads, and brunettes. (Marston’s machine is unmistakable as the source of Wonder Woman’s famous golden lasso of truth.)

Then there’s that costume.

Harvard historian Jill Lepore writes in her 2014 book “The Secret History of Wonder Woman” that the superhero wears “a golden tiara, red bustier, blue underpants, and knee-high, red leather boots. She was a little slinky; she was very kinky.” The kinky origins can be seen in a series of articles in the Schlesinger accession published in the gentlemen’s magazine True. The brief pieces by “Dr. William Moulton Marston, noted author and lecturer on female psychology,” describe the publication’s pin-up girls, including “Miss Chummy Bunny,” a drawing of a young woman in a bunny outfit and little else who is, according to Marston’s text, “chummy with men, certainly — even cuddly when the mood is ripe.”

The voices of the real women in Marston’s life come through in carefully preserved Family Circle articles written by Olive Byrne, Marston’s mistress, Sanger’s niece, and the inspiration for Wonder Woman, as well as in numerous letters from Marston’s mother to her son. After years of trying to have a child Annie Moulton Marston finally gave birth to William in 1893. “The letters go on and on … he was a very doted-upon person,” said Lepore, “which explains a lot about him psychologically.”

In a note dated May 6, 1942, just a little over a year after Wonder Woman made her debut, and before Marston’s mother had actually seen a copy of his comic, she wrote to him: “It’s wonderful that Wonder Woman has knocked Superman out of the top comics. To surpass Superman is an achievement. Although my knowledge of comics is decidedly limited, I do know that Superman has taken the highest place in that variety of literature.”

Lepore was instrumental in bringing the collections to campus.

While researching her book, Harvard’s David Woods Kemper ’41 Professor of American History found that many of Marston’s most important papers were still in family hands. She contacted his son, Byrne Holloway Marston, whose mother was Olive, about his collection in 2011.

“As a historian, as fun as it is to find stuff that no other scholar has ever seen before, you don’t want that stuff to be lost to other scholars,” said Lepore. “I had talked to Byrne early on about whether he might consider giving the papers to the University.”

Happily for Harvard and Wonder Woman fans everywhere, he agreed.

Lepore discovered another important Marston collection after her book was published. When she was in Washington in 2014 for a talk at the Smithsonian Museum of American History, where most of Marston’s comics-related material is now held, two of his granddaughters approached and told her how years earlier they had rescued a trove of his papers from the curb, where their mother had thrown it away. Lepore encouraged the women to give their cache to Harvard. They also obliged.

According to Jacob, the library has received only “the tip of the iceberg” from Marston’s granddaughters. More papers are set to arrive in the coming months.

“Once we have the rest, it will be even more comprehensive documentation of his life and work,” said Jacob.

“It’s an incredible trove of material,” Lepore said of the two collections that are currently being processed by library staff.

“As complicated and tricky and strange as are the origins of the story, it’s a really important part of American political history as well as American pop culture,” she added, “and I couldn’t be more grateful to the family for being willing to share that with a world of researchers and readers.”