Want to do well? Then do good 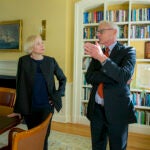 Steven Rogers, M.B.A. ’85, believes that those who are blessed have a responsibility to find solutions to problems, to create something that benefits society.

The way to do that, he believes, can be found in entrepreneurship.

“Those who have success at entrepreneurship, it not only provides them the freedom to be whoever they want to be, but more importantly it provides them with the freedom to uplift others, and make society a better place,” Rogers, the M.B.A. Class of 1957 Senior Lecturer of Business Administration at Harvard Business School (HBS), told the capacity audience of 150 people at the Harvard Ed Portal on Sept. 5.

His lecture, “High Growth Entrepreneurship and the Importance of Strategy,” was part of the 10th annual Faculty Speaker Series.

Before coming to Harvard, Rogers spent 17 years at the Kellogg School of Management at Northwestern University, where he was the most decorated professor in the school’s history. But Rogers wanted to come back to Harvard to teach his favorite class, entrepreneurial finance. Understanding that, he said, is key.

“I believe we can create a whole: great business success combined with giving back. One plus one equals three,” he said.

Entrepreneurship — identifying problems and creating ways to solve them — can change society, especially in underserved communities, Rogers said. This concept is so important to him that he changed the HBS curriculum. He saw that less than 1 percent of the 10,000 published case studies feature black protagonists, so he started “Black Business Leaders and Entrepreneurship,” which teaches M.B.A. students to help black businessmen and -women address common business challenges using their own skills.

“This is about how people of both genders, and all ethnicities and races, can come to understand the social benefits of entrepreneurship,” Rogers said. “I believe that at Harvard, and Harvard Business School in particular, it’s imperative we look at things and expect people to be the whole person — one who is not only intellectually brilliant, but also a person who is part of society and gives back to society.”

Robert A. Lue, faculty director of the Ed Portal and of HarvardX, said Rogers brought to his class and the Faculty Series “an essential global perspective on what it means to think strategically, how to be entrepreneurial, and how to think about the challenges facing the world and our need to empower both ourselves and each other to meet these challenges.”

And Rogers’ agenda at the Ed Portal was simple: to engage the audience in a discussion about problems, strategic solutions, their relationship with entrepreneurship, and its importance to a broad community.

“Entrepreneurship is a tool for providing something beneficial to society. First, we identify a problem — an unmet customer demand — then we create a company to solve it,” said Rogers. “That is the cornerstone of innovation.”

This was the first time Rogers lectured to the general public, and in an affable style he began by sharing stories of how his two daughters made their own entrepreneurial marks.

His oldest daughter, Akilah Naeem Rogers, Williams College ’07 and HBS ’10, identified the need for high-quality affordable housing on Chicago’s South Side. To address it, she started her own company to buy foreclosed properties in the neighborhood, fix them up and rent them to Section 8 tenants. His younger girl, Ariel Nailah Rogers, Princeton ’09 and Kellogg School of Management ’12, used her degree in aerospace mechanical engineering to teach mathematics at Urban Prep Academies, a charter school serving boys from economically disadvantaged households in Chicago. The school now boasts a 100 percent graduation and college acceptance rate.

“Behavior is reflective of socio-economic circumstances. Most in prison do not have a high school education,” Rogers said. “It costs more on average to incarcerate a man than to send a man to Harvard.”

Rogers said not all problems require massive, innovative change. Problems and solutions come in all areas, shapes, and sizes — like, he said, they did in the early days of the fast-food industry.

He began with McDonald’s. After singing the company’s original theme song, Rogers explained that it had based its success on the concept of food standardization, mass production, and uniformity. Burger King followed that by identifying the unmet demand of customization, or the build-to-order concept; Wendy’s in turn built on that by offering salads, something neither McDonald’s nor Burger King had done.

Rogers said that once a problem is identified, strategy is utilized to solve it — and an entrepreneur doesn’t have to have the first strategy, he said, just a different one.

“How is your solution different, what makes you different than what’s out there already?”

He offered plenty of other examples of innovation and strategy, such as Ikea’s concept of inexpensive, build-it-yourself furniture, or Steve Jobs’ inventing the iPod to improve on the portable music players then available.

“Identify an opportunity to create something. Entrepreneurs do something for society, they create jobs, which create self-sufficient people, which creates healthy communities,” Rogers said.

Phinn Lauenstein-Denjongpa ’13 did just that. An alumnus of the Harvard Graduate School of Education, in 2006 the Beverly resident opened the Taktse International School for students in kindergarten through grade 12 in the remote Himalayas. On Sept. 5, he brought two of the school’s graduates who now attend college in Massachusetts to the lecture.

“They are both interested in entrepreneurship and I thought this would be a great opportunity for them to learn more about how that works in this country,” he said. “I am so pleased we could come.”

Gregory Laskey drove nearly an hour from Grafton to attend the lecture. The recent University of Massachusetts graduate hoped it would expand his ideas for finding a job.

“I graduated in May with a degree in marketing and am training to be a financial advisor, and wouldn’t mind starting something for myself,” he said.

Nicholaus Mollel, a Watertown resident from Tanzania, is a software engineer whose projects involve working with people in East Africa.

“Entrepreneurship is always in the back of my mind. I came open-minded tonight,” he said. “Ideal growth means different things to different people. I wanted to see what Steven Rogers’ take is on it.”

Rogers said there are two kinds of entrepreneurs: lifestyle, and high-growth. Both meet a demand, but lifestyle entrepreneurs, or mom-and-pop businesses, simply provide an adequate income for themselves and their families. High-growth entrepreneurs put capital at risk and employ people, creating wealth for everyone involved.

“To be a successful high-growth entrepreneur means constantly thinking strategically. The more jobs you create, the better off society is,” Rogers said.

“Our philosophy at HBS is, you are responsible for being a leader who helps change the world. This whole purpose of being here is bigger than you. Money is good, but it has to be about something more than just money.”