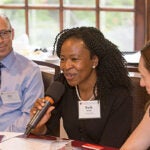 I must confess, I’m not quite sure where to begin.

It started as a blur, packing the van with my family, the agonizingly long drive from Alexandria, Va., and the terribly, terribly unhealthy fast food along the way. But then we got to Cambridge, and while it was so tangible, it was also so surreal.

When we reached Thayer Hall (where I will live this year) the first two faces I saw were my proctor and peer advising fellow, whose smiles have yet to fade. While they helped my parents unload, Thomas Dingman, the dean of freshman, and President Drew Faust casually walked over and introduced themselves — a thoughtful gesture that set a reassuring precedent for the days to come.

My classmates and I were met by astounding and influential individuals, all of whom seemed to want to get to know us on a level that was both personal and supportive. Administrators greeted us, as did professors, the graduate students I had met during Visitas, even the welcoming staff of the Gazette. Equally amazing was the seemingly endless wave of classmates who were eager to introduce themselves and ask me why I was wearing a suit.

Fast forward to late September and you wonder, “How is everything going?” I suppose one would think the honeymoon period — “Camp Harvard” — was over and that’s a fair assessment. Now I have classes and work to do.

But what replaced that pink cloud was the unconditional love I feel from my dorm community; the support that extended from this year’s seniors to the Class of 2021; the daily conversations with the staff at Annenberg Hall, the freshmen dining hall; and the casual friendliness with Dean Dingman and the other administrators who seem to know me surprisingly well.

The effort from the entire Harvard community made me feel truly a part of. For those who plan to attend Harvard, I feel the need to emphasize this: not only are you welcome here, but you belong here — and if you ever need anything when you get here, let me know.

On the academic side, classes have been incredibly fulfilling so far, and the captivating and personable — especially in the seminar classes.

As for the activities, it’s often said there are too many options at Harvard. Is that true? There really is a baffling number of opportunities. From writing for the Gazette or the Independent, to debating in the Harvard Political Union, to working with the fellows at the Institute of Politics, there many things I can vouch for already, and I’m truly happy to have these opportunities.

If I were to explain how I feel here as a freshman, I might say  “overwhelmed,” “stunned,” “enamored,” or “hungry because Annenberg is closed.” But none of these are quite as important as the word “grateful.” This sums up my entire perspective as a freshman and while it is succinct, it is also as accurate as it gets. I realize that this is a God-sent opportunity and not simply a once-in-a-lifetime event, which is why I look forward to making the most of it.

Malcolm Jamieson Reid, who has an interest in government and politics, will write an occasional column about his experiences as a Harvard College freshman.