Ryan to step down as Ed School dean 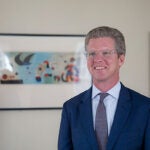 After leading the Graduate School of Education for four years, Dean James E. Ryan has announced that he will leave Harvard at the end of this academic year to become the University of Virginia’s next president, beginning Oct. 1, 2018.

Ryan, who is also the Charles William Eliot Professor of Education, is a top scholar on law and education, an authority on school desegregation and school choice, and a forceful advocate for expanding educational opportunities to close the student achievement gap.

Under Ryan’s leadership, the School of Education has strengthened its standing at the top of its field in numerous ways. He helped guide efforts to expand professional development and teacher-training courses, both online and on campus, and oversaw the launch of innovative programs on teaching and learning. He also led the School’s record fund-raising efforts.

“While I am excited and honored by the chance to serve my alma mater and a university at which I taught for fifteen years, it will be difficult to leave HGSE,” said Ryan in a letter to the Ed School community, announcing his departure. “I was an outsider to this institution when I arrived in 2013, but you quickly made me feel welcome. In a short period of time, I came not only to deeply admire this community, but to love it. The sense of mission, the dedication and talent, and the care and compassion that abound on Appian Way make this a remarkable community, and it has been one of the great privileges of my professional life to be a part of it.”

“An outstanding academic leader, teacher, and scholar with a commitment to improving and expanding education for all, Jim Ryan worked with colleagues to bring a transformational vision to the Harvard Graduate School of Education,” said Harvard President Drew Faust. “Harvard will miss his thoughtful and compassionate leadership, and I will miss Jim’s voice, wisdom, and humor as a member of the Council of Deans and a leader here on campus. I congratulate the University of Virginia’s Board of Visitors and the entire UVA community on the selection of their next president.”

Faust said she will launch a search for Ryan’s successor shortly and will welcome advice on the selection from across the Ed School community.

Ryan grew up in a blue-collar New Jersey suburb, attending Yale University and the University of Virginia School of Law. His early years fueled a passion that he said “stems from personal experience” on the importance of fair and effective education. He is a longtime champion of greater diversity, equity, and inclusion in education, and has written extensively on those principles while promoting programs embracing them.

With colleagues, he began an ongoing community-wide conversation on fulfilling the promise of diversity to help prepare students to work in diverse environments, and launched Reimagining Diverse and Equitable Schools (RIDES), a project to boost the number of diverse K–12 schools and to share best practices to help them tap into their diversity to thrive.

In 2016, Ryan became a YouTube star of sorts after he gave a Commencement speech on what he deemed the five essential questions to ask in life. The strong ripple effects of that address encouraged him to write a book, “Wait, What?,” that became a best-seller.

Ryan led the Ed School through a period of sustained growth and expansion with the same energy and discipline that helped him run three Boston Marathons. To further a School goal of preparing leaders to remake education, he worked with faculty colleagues to unveil the Harvard Teacher Fellows Program to train College seniors interested in teaching careers. He worked in the same collaborative spirit to establish the Teaching and Learning Lab, which supports new approaches to those areas on campus, and oversaw the genesis of two online programs, the Certificate of Advanced Education Leadership and an upcoming online certificate program in partnership with Harvard Business School. He also shepherded the addition of a fifth floor to the School’s Longfellow Hall.

To help disseminate the knowledge produced by researchers, Ryan moved to relaunch Usable Knowledge, which translates education research into stories and strategies for educators, parents, and the public. Hoping to attract entrepreneurs to help foster innovation education, he oversaw the launch of Scaling for Impact, a project to bring creative ideas to scale.

Under his leadership, the School raised $278 million as of September, surpassing its campaign goal of $250 million more than a year ahead of schedule. The support includes $35.5 million from the Saul Zaentz Charitable Foundation, the largest gift in the School’s history, which funded a major early childhood initiative. During Ryan’s tenure, revenue from the School’s popular professional development programs more than doubled.

Ryan also increased the size of the faculty. He hired 17 new faculty members and added 12 to the senior ranks. He established the Global Visiting Fellows program, which brings in international scholars, as well as the Dean’s Postdoctoral Fellowship for Faculty Development to prepare recent doctoral graduates from diverse backgrounds to succeed and thrive in careers as faculty members in education.

Before coming to Harvard, Ryan was a professor at the University of Virginia School of Law, where he taught constitutional law, law and education, and land-use law courses, and where he was a founding director of the public service program. In addition to co-authoring a textbook on “Educational Policy and the Law,” he wrote, “Five Miles Away, A World Apart,” in which he explored school segregation and inequality by comparing two schools, one mostly white and middle class and another mostly black and poor, around Richmond, Va.

In an interview with the Gazette in 2013 as he was taking the reins of the Ed School, Ryan spoke thoughtfully about the roots of his interest in education.

“I grew up in a blue-collar suburb in northern New Jersey, and neither of my parents went to college,” he said. “I attended the public schools in my hometown and was lucky enough to go to a great university. That experience literally changed my life and got me thinking as early as college about how lucky I was that the system worked for me, and wondering why it has failed so many others. And that really was the impetus for the questions I’ve been asking on almost all my scholarly work since. I’ve been trying to figure out, basically, how law and policy might expand educational opportunities and also strengthen supports outside of school, so that more students have an honest chance to fulfill their potential.”