A master of explaining the universe 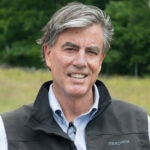 A pragmatic model to conserve land

He is the founder of the World Science Festival, the author of numerous best-selling books, including the Pulitzer Prize finalist “The Elegant Universe,” and an expert at explaining knotty concepts. Now he’s back at Harvard. On Sept. 19, Brian Greene ’84, Harvard Overseer and Columbia University theoretical physicist and mathematician, will explore shifting ideas of space, time, and reality in the Kim and Judy Davis Dean’s Lecture in the Sciences at the Radcliffe Institute for Advanced Study. The Gazette caught up with Greene to ask him about his years at Harvard, his passion for science, and how he defines superstring theory in a tweet.

GAZETTE: Where did your initial interest in math and physics come from?

GREENE: When I was a kid growing up in Manhattan I was deeply fascinated with mathematics, and at a young age my dad taught me the basics of arithmetic. I was captivated from then on by the ability to use a few simple rules to undertake calculations that no one had ever done before. Now, most of these calculations weren’t ever done because they weren’t interesting, but for a kid to be able to do something new is deeply thrilling. Later on, when I learned in high school and most forcefully when I got to college at Harvard that math isn’t merely a game but it’s something that can help you understand what happens out there in the real universe, then I was kind of hooked for life.

GAZETTE: Were there any classes or professors that had a big impact on you at Harvard?

GREENE: Oh, huge. Howard Georgi was my freshman physics professor, and he had a deep impact on my love of the subject. There’s now a mathematician who wasn’t at Harvard when I was an undergrad but whom I worked with extensively as a graduate student and then he moved to Harvard, Shing-Tung Yau in the Mathematics Department. He had a deep impact on me. The Harvard faculty had quite a formative impact on me across the years.

GAZETTE: I know you are famous for being able to explain awesome scientific concepts. In the age of social media, can you define superstring theory in a tweet?

GREENE: Superstring theory is our best attempt to realize Einstein’s dream of the unified theory. #unification.

GAZETTE: So break that down for me, and this doesn’t have to be in a tweet format. What is the unified theory of physics and why is it so important?

GREENE: Einstein envisioned that there might be a master law of physics, perhaps captured by a single mathematical equation that would be so powerful that in principle it could describe every physical process in the universe — the big stuff, the small stuff, and everything in between. And he believed it so deeply that he pursued it relentlessly for the last 30 years of his life. On various occasions Einstein announced that he had the unified theory, always, however, to have to retract that sometime later when he realized that his latest proposal didn’t quite work. In the end it was a very frustrating experience for him. And when he died, that dream of unification died with him. But about 10 or 15 years later some scientist stumbled upon a new approach — this approach called superstring theory — and over the course of decades realized that this may in fact be the unified theory that Einstein was looking for. And that’s what we have been developing ever since.

GAZETTE: What has been the main focus of your work for the last several years?

GREENE: Well, it’s a curious idea because for most people the word universe means everything: all that there is. But developments over the past couple of decades have convinced many of us that there is at least a possibility that what we have long thought to be everything is actually perhaps just a small part of a much bigger reality. And that bigger reality might have other realms that would rightly be called universes of their own, and if that’s the case then the grand picture of reality involves a whole collection of universes, and that’s why we no longer use the word universe to describe all there is … we speak of “multi” — there are multiverses because of this multiplicity of universes.

GAZETTE: Is there current or future research that you could see really changing the nature of how we see the universe?

GREENE: My own feeling, and it’s shared by colleagues, is that the next breakthrough will come when we deeply understand the fundamental ingredients of space and time themselves. And this is an open question. Just like matter is made up of atoms and molecules, could it be that space and time are themselves made up of more fundamental constituents? In fact, this is what I will be talking about at Radcliffe, recent work that at least hints at an answer to what the ingredients of space and time might actually be.

GAZETTE: What has inspired you to work to make science understandable?

GREENE: My view of science is not that it’s merely an effort to unearth the basic laws of physics, but I view it more as a very human undertaking to see how we fit into the grand scheme of things and to answer the questions that have been asked since the time we could ask questions: Where did we come from? What are we made of? How did the universe come to be? What is time? What will happen in the distant future? All these questions I think speak deeply to who we are as a species, and for the vast majority of people to be cut off from the most up-to-date thinking on these deep questions because they don’t speak mathematics, they don’t have a graduate degree in physics, I think that’s tragic. So for decades now I’ve felt that part of my charge is to bring these ideas to a wider audience, to make them available to anyone who has a curiosity and a little bit of stick-to-itiveness to push through some deep, difficult, but ultimately gratifying ideas.

GAZETTE: If you weren’t a physicist what would you be?

GREENE: Well, if I was starting out today I think I would probably go into neuroscience. I like to think of the big questions. Where did the universe come from? Where did life come from? And where does mind come from? And for those I think the time is really ripe to understand the nature of intelligence and thought. I think there are going to be great, great breakthroughs in that area in the next couple of decades.

GREENE: There’s nobody who compares with Isaac Newton in terms of the leap that he pushed humanity through from the way we understood the world before he began to think about it until after he existed.

GAZETTE: What is your take on Voyager?

GREENE: The “Star Trek” version or the real version?

GREENE: I think it’s a great symbol of who we are as a species. We are explorers. We are deeply committed to understanding the universe, and to envision these little spacecraft that have left the solar system and they are floating out there in the great unknown as harbingers, if you will, of human life back on the planet is a deeply moving picture and one that really captures who we are.