Branching out from her own tree of knowledge 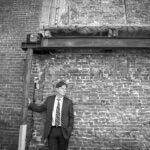 Revising the language of addiction

“I didn’t always enjoy it,” author Lynda Mapes says of her year doing “the nothing that is everything” at Harvard Forest in Petersham, Mass.

Mapes devoted her Charles Bullard Fellowship at the 4,000-acre forest to study of a towering oak, finishing in 2015. Her book about the experience, “Witness Tree,” was published this past April.

“I was lying on the ground once and this slug came into view right at eye level,” Mapes said. “It was completely hideous to me. Its little eyestalks were just roving around and it looked at me at the same time that I saw it. I had my face right where it was, on a root.”

As low points go, the slug encounter suggests Mapes’ fellowship worked out OK. Further evidence is in the book it helped her produce. The environmental reporter for The Seattle Times stacked a pair of fellowships — an MIT Knight Fellowship and the Bullard — to craft a unique view of climate change.

“To me, it’s one of the most important stories of our times and yet, if you talk about parts per million or dueling politicians, people just don’t really listen,” Mapes said. “As a writer and a journalist, I was looking for a different way to tell the story of climate change — through the charisma of living things, the beauty of the natural world — and to deliberately go after people’s hearts.”

“Witness Tree” uses a single oak, healthy and playing its role as a backbone of a Northeastern forest, to tell the broader story of how the surrounding landscape changed from the stone-walled pasture in which the tree took root to a thriving forest, and of the changing planet of which the forest is but a small part.

“I wanted intimacy,” she said. “That’s what I was going for, to transform the narrative from this abstract, political, sometime-way-in-the-future, somewhere-else-that-doesn’t-involve-you, to something that is true, that actually is right here and right now, going on right in your own yard.”

Mapes’ quest began in 2013, when she drove east from Seattle to start her MIT fellowship. She planned to explore climate change through a single living thing, but didn’t know which thing. The turning point came when she visited the lab of Andrew Richardson, then an associate professor of organismic and evolutionary biology at Harvard. Richardson, who is now at Northern Arizona University, had been using cheap, simple, widely distributed cameras to keep tabs on how forest canopies change with the seasons. Those studies of leafing, fruiting, and leaf drop — called phenology — inspired Mapes to make her subject a tree and, ultimately, a forest oak.

The book tracks Mapes’ observations during long periods of sitting and observing, bough climbing, and lying on the ground — literally at slug level — to take pictures of the tree. Throughout, she weaves her own journey with that of nature, describing the remarkable transformation — reflected across New England — that saw the region go from cheek-by-jowl farms to the current landscape. She describes what life was like for the land’s original farmers and for the surrounding town, moving ahead through time to paint a rich portrait of today’s scientific community at Harvard Forest and closing with what she views as one of the biggest challenges facing the world today: climate change.

Mapes cherished the gift of time, visiting the tree at least twice a day. Boredom was never an issue, she said.

“In this day and age, to have the time to do ‘the nothing that is everything’ was just such a joy,” Mapes said. “[The tree] was obviously, demonstrably different every day just because of the weather and the light. And, in fact, you can only see some of the things I saw if you look at it that frequently. For instance, in the deep cold of those winter mornings there was a very special coating of frost on the twigs and branches that would be gone by 10 in the morning … and the animal tracks — it was ever changing.”

Harvard Forest’s director, David Foster, said Mapes captured well the essence of the site, which is not just thousands of acres of trees, but an active research community. In addition, Foster said, Mapes’ work sends an important message about climate change.

“I think Lynda did a fabulous job. She’s a superb writer and just a passionate investigator,” Foster said. “She … [makes] climate change and the science behind climate change accessible.”

It’s one answer to a problem government has been slow to attack. Mapes remains hopeful that citizens and leaders will grasp the full threat of climate change and take action before it’s too late.

“It’s helpful to lose the guilt and face the fact honestly of where we are,” she said. “We need to think as smart and be as adaptive and responsive as a tree is to its environment, and be as mutually supporting and cooperating as a forest is and we’ll get someplace. Nature is a wise teacher.”