The robots are coming, but relax 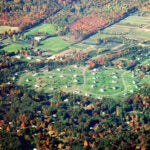 New England is losing 65 acres of forest a day

As AI rises, you’ll likely have a job, analysts say, but it may be a different one

The fear of losing your job to a robot is by no means a new phenomenon, despite being a worrisome one. Jason Furman, professor of the practice of economic policy at Harvard Kennedy School and former chairman of the White House Council of Economic Advisors, proved that at a session called “Will You Still Have a Job When the Robots Arrive? AI and Its Effect on the Workplace.”

Early in the John F. Kennedy Jr. Forum, Furman showed an alarmist newspaper headline that read “Robots Rise: They bid for big jobs, both in outer space and in U.S. factories.” The story was from The Wall Street Journal. The year was 1960.

“So you can see it’s not a new thing,” he said. “We’ve had a lot of transformation. For example, most of the food that we now eat is produced by machines. But if you look at the unemployment rates for 1901 and for 2017, they were almost the same. In the past five years, we’ve actually been creating a lot of jobs, but not adding much to the GDP [gross domestic product]. People are working more but not producing very much, which is exactly the opposite of what you’d expect from AI [artificial intelligence]. So maybe the robots aren’t coming fast enough.”

The tone of Thursday evening’s panel, moderated by Greg Ip, chief economics commentator for The Wall Street Journal, was largely optimistic. The panelists agreed that artificial intelligence is transforming the workplace, creating jobs that call for different skills, putting low-income jobs at most risk. They also agreed that education is crucial to equip workers with the required shift in skill demands. So to answer the panel’s title: Yes, you’ll probably still have a job, but maybe not the same one.

“Humans and machines are very complementary,” said Francesca Rossi, AI ethics global leader at IBM Research. “I want to stress the word ‘transformation.’ Every job will be transformed, and we need to adapt. Some tasks will be eliminated, and others will appear. And it’s important to engage in educational efforts to help the workplace adapt.” She cited P-TECH, the program that IBM developed to provide technical education to students in grades 9–14, as one such effort. “Avoid the doomsday predictions and hype from the movies and media,” she advised. “Those scenarios aren’t realistic, and we are very far from them.”

Still, as Ip noted, the economic climate in 2017 is a long way from 1960. This, he said, was the third panel on AI that the Kennedy School has hosted this year. “Nothing terrible has happened yet, but smart people are saying it’s different this time.” And he asked the panelists to name specific areas where new jobs might be created because of AI’s rise.

Wilson White, public policy and government relations senior counsel at Google, responded that his company currently employs a team of AI researchers working specifically on Google Assistant, an app that responds to directed questions and demands. “It’s hard to use Google today without using an AI product, such as Google Search or YouTube,” he said. “We need to examine how to get the maximum benefit from the technology, in terms of how we’d like to see society grow.” He cited automated teller machines as one innovation that was feared would put humans out of business. Instead, he said, ATMs led to more branches opening and more tellers being hired.

Rossi also raised the possibility that robots, in the end, could prove to be more ethical in some areas than humans. If robots were choosing whom to hire for a company or to approve for a bank loan, they could be programmed to avoid biases that humans might feel, Rossi said.

Ip pointed out that many ethical issues remain. “We still don’t have pilotless aircraft,” he noted, “but Facebook has algorithms that decide where to target ads. So why should Facebook be able to do what airlines can’t do?”