A transition for Transition 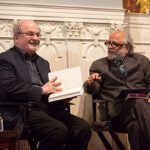 A shady past haunts Rushdie’s ‘House’

A modest publication that became Africa’s pre-eminent cultural and literary magazine in the 1960s recently celebrated a homecoming of sorts — in print, no less.

Founded in 1961 in Kampala, Uganda, as Transition, a Journal of the Arts, Culture & Society, the magazine that published work by the likes of novelist Chinua Achebe, poet Christopher Okigbo, and future Nobel laureate Wole Soyinka has been housed at Harvard’s Hutchins Center for African and African American Research for the past 26 years.

In July, Transition returned to print in Africa.

A partnership with Jalada, a pan-African writers’ collective based in Nairobi, allowed the magazine’s latest issue to be printed in Kenya, from where it is being distributed across the continent.

It is the first time that Transition has been published in Africa since the early 1970s. Henry Louis Gates Jr., the Alphonse Fletcher Jr. University Professor and director of the Hutchins Center, then revived it as “the magazine of Africa and the diaspora” in 1991. Since then, it has been distributed mostly to U.S.-based subscribers. In a press release, Gates, who is Transition’s publisher, said he was thrilled to see the magazine’s reappearance on the continent.

“The partnership of Transition and Jalada and the opportunity to print in Kenya mark an exciting and historic moment to celebrate the magazine in the region where it was conceived and made such an important intellectual contribution to post-independence Africa,” said Gates.

Founded by Rajat Neogy, a Ugandan writer of Indian descent, Transition became a spirited forum for intellectual debate in the 1960s, a critical time for the continent as countries gained independence from European colonial powers.

Led by Neogy, the literary magazine took a risky plunge into politics. In 1968, after it criticized Ugandan President Milton Obote’s increasingly authoritarian rule, Neogy was jailed on charges of sedition. The magazine closed until he resurrected it in Ghana in 1971, but five years later he folded it for lack of funds. He died in 1995 in the United States.

But even when the magazine was financially troubled, Transition’s pages attracted literary stars such as future Nobel laureates Nadine Gordimer and V.S. Naipaul, and distinguished African writers like David Rubadiri from Malawi, Cameron Duodu from Ghana, and Ali Mazrui from Kenya. The magazine also supported the Civil Rights Movement in the United States and published work by James Baldwin, Langston Hughes, and Martin Luther King Jr.

The latest edition of the storied journal features essays, fiction, poems, and visual arts pieces on the theme of fear by contributors as notable as Paul Theroux, Cornel West, and Sudanese writer Leila Aboulela, as well as emerging African talents.

Over the decades, the publication has undergone a startling physical transformation. Its first issue was printed in black and white and was awkwardly designed, and the articles were interspersed with ads for tractors, Mercedes-Benz cars, Kampala pharmacies, and other local businesses. The latest edition is handsomely printed by Indiana University Press.

With its publication on the continent, both the magazine and African writers will benefit from the partnership, said Alejandro de la Fuente, Transition editor and director of the Afro-Latin American Research Institute at the Hutchins Center. This fall, de la Fuente will teach a seminar on the history of Transition. Students will take part in designing, editing, and producing the journal and will be listed as student associate editors.

Sara Bruya, Transition’s managing editor, lauded the collaboration that began two years ago when she met with members of the Jalada collective in Kampala.

“This is huge for us,” Bruya said. “We have been waiting for this to happen for a long time. It will help Transition expand in many new and exciting directions.”