Making the most of a dead lizard in the snow 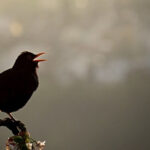 The extreme “polar vortex” winter of 2013–14 did more than set records across the United States; it created conditions for a Harvard graduate student to explore something rarely observed by biologists: natural selection in action.

In 2013, Shane Campbell-Staton, who would receive his doctorate from Harvard in 2015, was using a type of lizard called green anole to investigate the genetics of cold tolerance for his doctoral work. The green anole is among the most hardy of the roughly 400 species of anole, which are mostly spread across the warmer climes of the Caribbean and Central and South America.

Late in the year, Campbell-Staton was close to wrapping up his dissertation research. He had finished his last planned collecting trip, spending six weeks gathering green anoles at five locations spread over 750 miles between Brownsville, Texas, on the Mexican border and Hodgen, Okla., an area covering much of the species’ variation in cold tolerance. When Campbell-Staton returned to Harvard, his degree was in reach. All he had to do, he told advisers Scott Edwards, a professor of organismic and evolutionary biology, and Jonathan Losos, the Monique and Philip Lehner Professor for the Study of Latin America and an expert in anoles, was put the most recent results into his dissertation.

But early in the new year, an anomaly occurred in the polar vortex, a system of low pressure that traps the Arctic’s bitter cold over the pole. A weakening in the vortex allowed that chill to spill out. Campbell-Staton, who grew up in South Carolina, watched as the cold moved south, snow piled up, and records fell. He remembers TV coverage of cars trapped in snowdrifts and people stuck at the local Piggly Wiggly.

“We don’t do cold in the South,” said Campbell-Staton.

One newscast showed a green anole dead in the snow, which got the young scientist thinking about the impact of such a deep cold on the lizards. In theory, the death of less cold-tolerant individuals at any specific location tilts the population toward those exhibiting a greater ability to stand the cold. The natural selection exerted on the current generation would cause an evolutionary shift, so that the next time the cold struck, more individuals would survive.

Campbell-Staton realized that his earlier collecting trips put him in the perfect position to illuminate this process. He could use his earlier data as a baseline, revisit the sites where he had collected anoles, collect a new batch, and compare the groups. On collecting trips in April and July 2014 he found a strong shift in cold tolerance in the two southernmost populations.

Campbell-Staton’s results, published in the journal Science, detailed changes on several levels. Prior work describing natural selection largely relied on physical changes, such as the larger house sparrows that survived a severe snowstorm that Hermon Bumpus observed in 1898, but Campbell-Staton had more tools at his disposal. In addition to gross physical characteristics like cold tolerance, Campbell-Staton used genomic techniques to document changes in gene expression: The southernmost lizards had patterns that more closely mirrored northern populations.

“We showed that, in those southern two populations, we see these strong shifts in cold tolerance based on the thermal profile of that winter, with respect to how cold it normally gets at those sites,” said Campbell-Staton, now a postdoctoral fellow at the University of Illinois and the University of Montana who will start as an assistant professor at UCLA next year. “Survivors of the storm [at the southernmost site] seem to have expression profiles more similar to animals that naturally occur farther north.”

One challenge in documenting natural selection, Edwards said, is that changes can be subtle and difficult to detect. Further, as Campbell-Staton noted, natural selection driven by extreme weather is hard to anticipate, in line with the events themselves — such as the unusual polar vortex of a few years back.

“It was very exciting to me because it’s not something we’ve been able to document very often,” Campbell-Staton said. “This study was intriguing to me because we had the ability to not only look at the response of traits — whole organism performance — but we also had a chance to look at response at finer levels of biological hierarchy. So we could look at it at the level of whole organism traits, at the level of gene expression and networks of genes, and then also at the actual genetic level, looking at sequence variation in response to events.”

Edwards said that though DNA analysis and lab work are invaluable in understanding the natural world, it is still important for biologists to conduct good fieldwork. He praised his student’s willingness to continue a project whose end was already in sight.

“That’s absolutely what it’s all about,” Edwards said. “So many discoveries in science are based on a mistake or an unanticipated result. He was willing to shift course a bit and put more emphasis where he hadn’t planned to. A lot of people don’t like surprises.”