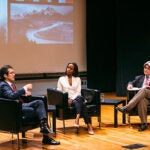 Harvard takes to the Twin Cities

Fred Lee Glimp Jr. ’50, Ph.D. ’64, whose nearly 50 years of service to Harvard left an indelible mark on generations of students, alumni, and the University itself, passed away in June at the age of 91.

At a retirement celebration in 1996 honoring his decades of service to Harvard, buttons were distributed that read: “Be Like Fred.” It was a fitting sentiment for a man who was widely recognized for his kindness, generosity, and commitment to getting the best out of everyone around him.

Born and raised in Boise, Idaho, Glimp joined the U.S. Army Air Corps after high school to fight in World War II. Upon completing his service he sent what he considered to be a long-shot application to Harvard College.

His knowledge of Harvard at the time was based mainly on a copy of “Yankee From Olympus” his mother had sent him when he was overseas, which painted scenes of an idyllic campus in the time of Oliver Wendell Holmes Jr., and an article in Life magazine that discussed the College’s challenge in dealing with an influx of servicemen. Glimp welcomed the challenge and later told The Crimson, “If [Harvard] was so hard to get into, it was worth trying.”

He was accepted into the Class of 1950, arriving on campus for the first time in the fall of 1946. “I’d been out of high school for four years, so I was rusty,” he later told Harvard Magazine.

Glimp then received a Fulbright Scholarship that allowed him to spend the following year in England studying at the University of Cambridge, after which he returned to Harvard to pursue a doctorate in economics.

While studying at Harvard’s Graduate School of Arts and Sciences, Glimp sought out additional work. “I was sick of being on the dole,” he would jokingly explain to The Crimson.

Wilbur Bender ’27, then the director of admissions and financial aid, was hiring and appreciated the perspective that Glimp brought to the table as a former serviceman. At first considering it a temporary job, Glimp spent the next six years under Bender’s tutelage, traveling the country to seek out candidates who would not normally consider Harvard College an option, and building a student body that was more diverse than ever.

The work suited him, and Glimp soon assumed the role of director of freshmen scholarships, a position he held until Bender left Harvard in 1960, and Glimp was elevated to dean of admissions and financial aid.

Over the next seven years — in addition to completing his Ph.D. in 1964 — Glimp built on Bender’s efforts to seek out talented applicants from all walks of life to create a more vibrant student body. During Glimp’s tenure as dean, the number of freshmen receiving scholarships increased from 25 percent to 40 percent, and the amount of aid more than doubled, from $1.2 million to $2.7 million.

Glimp also sought out equally talented administrators. One of those was Jack Reardon ’60, who left a job working for Ed Logue at the Boston Redevelopment Authority to join the admissions staff in 1965 — a move that, like Glimp’s own, led to a lifelong career at Harvard.

“Nobody made a bigger difference in my life than Fred. First, convincing me to work here, and then, being supportive of everything I wanted to do,” said Reardon, adding that he was one of many who would share that sentiment.

In 1967, Glimp was named dean of Harvard College, succeeding John Monro. Those were turbulent years for the University. With opposition to the Vietnam War reaching a boiling point on college campuses across the country, Glimp had the daunting task of maintaining order at a time when many aspects of society were rapidly changing.

He would later reflect that, “If one assumes that what happened to Harvard in the late 1960s was bound to happen in one serious degree or another, I would not trade the mixed experiences of those years for any other.”

Former University President Neil Rudenstine recalled at Glimp’s retirement, “In a turbulent time, [Fred] brought unfailing good sense, clarity, and steadiness of purpose, strong values, and human warmth to Harvard, when so many of these essential qualities were so often in such short supply in universities throughout the nation.”

Glimp again replaced Bender in 1969, when he was named executive director of the Permanent Charity Fund (now known as the Boston Foundation) following Bender’s sudden death.

The decade’s turmoil in education was not limited to college campuses. The Boston Public Schools were then failing to educate nearly 10,000 children, by one study’s account, due to “disabilities or lack of English language skills.”

Glimp directed resources to nonprofits that worked successfully for state legislation addressing both obstacles. The Permanent Charity Fund also placed special emphasis on access to health care for city residents. During his tenure, Glimp helped with early funding for community health centers across Boston and made significant contributions to create what would later be named Brigham and Women’s Hospital in the Longwood Medical Area.

Glimp found similarities in the work at Harvard and the Fund. “There are more good requests than there is money for, but there is also a clear case for ‘recruiting’ new proposals that would not otherwise be seen, which means more difficult decisions, more requests turned down, and a greater sense of having inadequate income for what can be done,” he would explain.

After nearly 10 years at the Permanent Charity Fund, then-President Derek Bok asked Glimp to combine his expertise in University affairs and philanthropy by serving as vice president for Alumni Affairs and Development, a post he would hold for the next 18 years. Tom Reardon, who worked with Glimp in that department before succeeding him as vice president, said both he and the University were lucky.

“Organizations take on the characteristics of their leaders and he set great expectations in a very humane way,” said Reardon. “Fred intoned a moral, ethical standard that permeated the office. He was a thoughtful, kind, tough-minded individual.”

With his leadership on two capital campaigns — both record-setting efforts — and strengthening an increasingly global network of alumni, Glimp’s mark on the University will resonate for generations to come.

Glimp credited his wife and children with his success. At his 25th College reunion, he said, “Life with my family has meant a great deal to me; subjectively, I care more about it than any other part of my life. I have always enjoyed having stress in my professional life, but I suspect that is so largely because of my extraordinary luck in having a daily life of mutual love and respect with my family.”

Glimp is survived by his wife of 65 years, Eleanor “Buster” Foley ’48, four children, and 10 grandchildren.

A memorial service will be held Sept. 9 at 2 p.m. at the Memorial Church “for Glimp’s friends, family, and colleagues to celebrate his remarkable life and remember the importance of striving to ‘Be Like Fred.’”