Cancer alarm at the firehouse 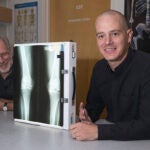 Harvard researchers have teamed up with local fire departments to tackle a health care mystery: How does the firehouse itself increase cancer risk among firefighters?

Led by postdoctoral fellow Emily Sparer, researchers including students from Harvard and MIT tested air quality in three older Boston firehouses and examined the results against air quality in a newer Arlington station, renovated roughly a decade ago to minimize transfer of pollutants from the truck bay to living quarters.

Compared with conditions inside a burning building, firehouses may seem benign places. But because firefighters spend so much time in the firehouse, even low-level exposure might be hazardous, said Professor Glorian Sorensen, director of the Harvard Chan School’s Center for Work, Health, and Well-Being and Dana-Farber Cancer Institute’s Center for Community-Based Research, who has overseen the research.

Diesel exhaust, for example, is a carcinogen, and in older firehouses — Boston’s date from the 1800s to 1980s — the truck bays are near the living quarters. Also, the design of the buildings is such that air flows easily through doorways and the hole in the floor for the fire pole, Sparer said.

“[Fighting fires] is very important, however, a lot of firefighters actually don’t spend the majority of their shifts fighting fires,” Sparer said. “They respond to car accidents or are at the fire station, where there might be other kinds of exposures that haven’t been looked at.”

Sparer’s team investigated three locations at the four stations — truck bay, kitchen, and outside the building — and conducted interviews with firefighters about living conditions and health habits.

The pilot study, supported by the National Institute for Occupational Safety and Health, examined two types of pollutants: tiny particles generated in fossil fuel combustion that have been shown to be harmful, and potentially cancer-causing chemicals called polycyclic aromatic hydrocarbons (PAHs). The results were published in the Journal of Occupational and Environmental Medicine.

The research showed that age and layout of the station affected how effectively truck exhaust was captured and vented, that pollutants at each station were highest in the truck bays, and that pollutant levels in the living areas — where the firefighters spend a substantial amount of time — were lowest in the Arlington station designed to restrict air flow from the truck bay.

The results not only show that building design is an important factor in protecting firefighters, Sparer said, they also support the case for a larger study on which recommendations for interventions can be based.

The project launched about two years ago, when the Boston Fire Department approached Dana-Farber to discuss concerns about anecdotal evidence of high cancer rates among city firefighters. Institute officials referred them to Sorensen, an expert on cancer in the workplace. Sorensen turned the project over to Sparer, who had just begun her postdoctoral fellowship.

Boston Deputy Fire Chief Jim Hoar, who heads the department’s Safety, Health, and Wellness Division, said it is well accepted among firefighters that cancer is a serious occupational threat.

“The hardest thing for guys who’ve been on [the job] like myself, 20 years or a little bit more, is you start to hear about guys you worked with cheek by jowl. … There are a lot of those folks, too many to mention, who didn’t make it.”

Arlington Deputy Chief John Kelly described the same pattern. Early in his career, Kelly thought that older firefighters developed cancer mainly due to age, like the rest of the population. But as more research linked pollutants and disease, his thinking changed.

The Arlington firehouse in the new study was renovated about a decade ago to separate the truck bay from the living quarters, Kelly said. The original truck bay was longer, he said, and gym equipment and a card table were located at the end of the bay, exposed to diesel fumes from the engine. Soot from the diesel exhaust used to settle throughout the station.

“You’re sitting on a couch covered in it,” Kelly said. “Your clothes are always dirty and you just didn’t think anything of it. Very few of our guys have died without cancer over the last 10 years.”

With the new design, the truck bay was shortened to make room for a separate kitchen, and the gym was moved to the basement, away from truck exhaust.

High cancer rates in firefighters have been documented in several studies, Sparer said, including a recent report that examined work- and health-related data between 1950 and 2009 for 30,000 firefighters in Philadelphia, Chicago, and San Francisco. The research showed an elevated rate of cancer diagnoses and deaths for firefighters, mainly for digestive, oral, respiratory, and urinary disease. In addition, firefighters were about twice as likely to develop malignant mesothelioma, a rare cancer related to asbestos exposure.

Diesel fumes aren’t the only firehouse cancer threat, Sorensen said. Toxins can be absorbed by gear and released in the station. Some stations have industrial washing machines to clean gear, but many still don’t. Unusual job shifts are another factor, Sparer noted. While most OSHA regulations regarding workplace pollutants are based on the conventional eight-hour shift, firefighters typically work 24 hours at a time.

“These guys are sleeping, eating, exercising, training, reading a book, hanging out at their workplace,” Sparer said. “And so, in a given shift of 24 hours … they can be in the station for a long period of time.”

Though an ideal fix would be to renovate all older firehouses to separate people and pollutants, that solution is expensive and won’t happen overnight. Hoar said the average age of a Boston firehouse is 76 years, with some built for horses and wagons. Right now the city has three renovations underway or in planning.

In the near-term, one obvious improvement would be to ensure that all firefighters get basic cancer screenings. Sorensen said other simple interventions should be considered, such as efforts to encourage better dietary practices.

“We are trying to look at what are the exposures, what are the opportunities for potential intervention,” she said.