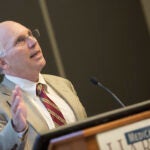 The average American today is twice as likely to be diagnosed with knee osteoarthritis as in the years before World War II, Harvard scientists say. And the reasons are less clear than you might think.

Based on a study of more than 2,000 skeletons from cadaveric and archaeological collections across the United States, a Harvard report is the first to definitively show that knee osteoarthritis prevalence has dramatically increased in recent decades.

The findings, published this week in the Proceedings of the National Academy of Sciences, also upend the belief that the disease is a wear-and-tear condition widespread today because people live longer and are more likely to be obese.

“Before this study, it was assumed without having been tested that the prevalence of knee osteoarthritis has changed over time,” said first author Ian Wallace, a postdoctoral fellow in the lab of Daniel Lieberman, the Edwin M. Lerner II Professor of Biological Sciences and senior author of the study.

“We were able to show, for the first time, that this pervasive cause of pain is actually twice as common today than even in the recent past. But the even bigger surprise is that it’s not just because people are living longer or getting fatter, but for other reasons likely related to our modern environments.”

Osteoarthritis affects an estimated one-third of Americans over age 60, and is implicated in more disability than almost any other musculoskeletal disorder.

“Understanding the origins of knee osteoarthritis is an urgent challenge because the disease is almost entirely untreatable apart from joint replacement, and once someone has knee osteoarthritis, it creates a vicious circle,” Lieberman said. “People become less active, which can lead to a host of other problems, and their health ends up declining at a more rapid rate.”

Wallace and Lieberman think that their study has the potential to change the popular perception of knee osteoarthritis as an inevitable consequence of aging, creating momentum behind efforts to prevent the disease — much like we now do with heart disease.

“There are a lot of well-understood risk factors for heart disease, so doctors can advise their patients to do certain things to decrease their chances of getting it,” Lieberman said. “We think knee osteoarthritis belongs in the same category because it’s evidently more preventable than commonly assumed. But to prevent the disease more work needs to be done to figure out its causes.”

The researchers’ initial goal was to determine how old the disease actually is, and whether it is really on the rise.

“There are famous examples in the fossil record of individuals, even Neanderthals, with osteoarthritis,” Lieberman said. “But we thought, let’s look at the data, because nobody had really done that in a comprehensive way before.”

Wallace crisscrossed the country to examine skeletons spanning more than 6,000 years to search for a telltale sign of osteoarthritis.

“When your cartilage erodes away, and two bones that comprise a joint come into direct contact, they rub against each other, causing a glass-like polish to develop,” Wallace said. “That polish, called eburnation, is so clear and obvious that we can use it to very accurately diagnose osteoarthritis in skeletal remains.”

The data Wallace collected was combined with analyses from other researchers, creating a large pool of older individuals from three broad time periods — prehistoric times, early industrial times (mainly the 1800s), and the modern post-industrial era.

“The most important comparison is between the early industrial and modern samples,” Lieberman said. “Because we had data on each individual’s age, sex, body weight, ethnicity, and in many cases, their occupation and cause of death, we were able to correct for a number of factors that we considered important covariates. So using careful statistical methods, we are able to say that if you were born after World War II you have approximately twice the likelihood of getting knee osteoarthritis at a given age or BMI than if you were born earlier.”

Wallace and Lieberman are now working to identify what factors may be behind the increase. An evolutionary approach has been critical, they said.

“Epidemiology typically looks at large cohorts of individuals living today to search for associations between a disease and risk factors,” Lieberman said. “That’s a powerful and valuable method, but it has one critical imitation, which is that the world today is different in many ways from the world in the past, hiding important risk factors that are either no longer prevalent or have become ubiquitous. An evolutionary perspective opens new opportunities to test for associations we might not be able to study in populations like modern-day America.”

“Knee osteoarthritis is not a necessary consequence of old age,” Lieberman said. “We should think of this as a partly preventable disease. Wouldn’t it be great if people could live to be 60, 70, or 80 and never get knee osteoarthritis in the first place? Right now, our society is barely focusing on prevention in any way, shape, or form, so we need to redirect more interest toward preventing this and other so-called diseases of aging.”

The study was supported with funding from the Hintze Family Charitable Foundation and the American School of Prehistoric Research (Harvard University).