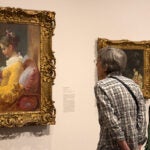 Harvard lecturer Paul Yoon on process, teaching, and the spark behind his new story collection

This month, Paul Yoon begins his second year teaching fiction in Harvard’s Creative Writing Program. The son of South Korean immigrants, he is the author of the novel “Snow Hunters,” which won the 2014 Young Lions Fiction Award from the New York Public Library, and the 2009 story collection “Once the Shore.” In his new book of stories, “The Mountain,” characters touched by violence and loss search for a forward path.

Until he started his five-year term as a Briggs-Copeland lecturer, Yoon moved on a near-annual basis. In a Gazette Q&A ahead of his Aug. 17 reading at Harvard Book Store, he spoke about the migratory nature of “The Mountain,” his writing habits, and why he judges a book by its cover.

GAZETTE: Where did “The Mountain” come from?

YOON: I was thinking about the amount of access we have to the world right now. Because of social media and our phones, we have access to events around the world in a heartbeat, a global event or something more intimate such as a domestic event, and I thought, “Rather than tackle that in an obvious way, why not write a book set all over the world and simply let it stand for itself?” I wanted to present a global canvas and write as many time periods and locations as I could. I always knew I wanted to start in the Hudson Valley because that’s where I’m from. In the first story, “A Willow and the Moon,” I didn’t realize it was set in the second half of the 20th century until halfway through it. I went east and went forward in time from there. That became the guiding light.

GAZETTE: Few of the characters have close friends or family, and there are hardly any children. How did loneliness become such a powerful theme?

YOON: When I was given the opportunity to write a book as a Cullman Fellow at the New York Public Library, I was coming at it from a place of transition. Thinking about how many times we had moved, where we had been, where we had ended up, that was the original theme for me.

GAZETTE: Can you describe your life in motion?

YOON: I lived a peripatetic life. My dad was a doctor. He was bounding around hospitals, and eventually we made our way to the Hudson Valley area. I spent my formative years in New Hampshire at boarding school. I went to college in Connecticut. Since then, I’ve moved around and continued this itinerant life. I married a writer [Briggs-Copeland lecturer Laura van den Berg], so we both live this life where we need to have day jobs. We would move, unpack, try to write our books, make some money. Then the contract would be done and we’d move again. That’s what we’ve been doing last five years. The beauty is we’re doing it together.

GAZETTE: There are subtle connections from one story to the next. How did you thread it together?

YOON: I had a world map on my wall when I was working on this book with two dots in New York, two in Europe, and two in East Asia. I think what was interesting was the amount of space in and around the dots. I set the stories in specific locations, but the map made me painfully aware of the places I wasn’t telling about. It was also fun on a nerdy writer level to write the end of one story and somehow link it with the next one. So “A Willow and the Moon,” the first story, ends with two people staring out from a porch and the second story begins with two people waiting on a bench.

YOON: When I was starting out I was a nighttime writer, [now] I find myself working in the afternoons. Consistency is very important. If I do it one day, I do it as many days as possible. I’m a nerd about rhythm. It drives everyone around me crazy, but it’s always been the only way I know how. As life goes on, more things vie for your attention. No one is waiting for my work, so it’s this constant confrontation with day-to-day life to have the courage and the right to hide myself for even like an hour.

GAZETTE: The book cover is beautiful. Is it a watercolor?

YOON: Yes, the physical book is so important to me. I think about it quite often. My first love was as a reader. The magic of going into a bookstore is you have to judge a book by its cover. I gravitated to whatever called to me, [such as] the old hardcovers of Michael Ondaatje that Knopf designed. On his older book, “In the Skin of a Lion,” there’s a beautiful, sensual painting. Or the black-and-white photograph of the sandstorm on “The English Patient.”

GAZETTE: You teach fiction, but focus on short stories. What lessons are unique to that genre?

YOON: Regardless of short or long form, it’s a race against time. Class goes by so fast. I could talk about one student’s story for three hours and not even get to the tip of that iceberg. The challenge is how to pinpoint something in a short story that’s teachable to them. It’s also a conversation of literature as a whole culturally, but also in this semester with the class as a kind of family unit. A lot of students will never take a creative writing class again. I feel the responsibility with great joy to instill upon them ideas of wholeness and completeness.