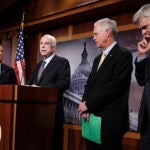 HMS bioethicist Truog: ‘We’re looking at those rare situations where the genes really are life-threatening’

The announcement by Oregon Health & Science University that scientists there had edited the genes of human embryos to remove the cause of a deadly disease has raised the prospect of a powerful new tool for physicians — as well as fears of a Pandora’s Box that could lead to “designer babies” and humans engineered for desirable traits such as strength or intelligence.

Robert Truog is the Frances Glessner Lee Professor of Medical Ethics, Anaesthesiology, and Pediatrics, and the director of Harvard Medical School’s Center for Bioethics. In a Gazette Q&A he shared his thoughts on the debate the breakthrough set off.

GAZETTE: Researchers said they cured a relatively common and potentially deadly genetic disease, hypertrophic cardiomyopathy. Why is this not uniformly good news? What’s the big fear?

TRUOG: Many people believe that there’s something sacred about the human genome and messing with it feels like playing God. In their view, we shouldn’t be interfering with the natural order of things. These are serious concerns and they definitely need to be addressed. But the idea that we could choose not to do this, I think, is impossible. If we were to decide not to pursue human genome editing in the United States, it would still take place everywhere else in the world.

We have an opportunity here for a leadership role — to show how, with good oversight, we can do research in controversial areas in ways that are careful, well-considered, and cautious. The National Academy of Sciences’ report captured this extremely well. They did not recommend a prohibition on human genome editing, but they did stipulate a number of considerations that needed to go into any proposals about doing this kind of work.

GAZETTE: What were the most important of those considerations, to your mind?

TRUOG: One is that it concern only severe and life-threatening diseases, such as hypertrophic cardiomyopathy, which the Oregon researchers were looking at. We’re not looking at “enhancements” here, we’re not looking at how to make normal people better, we’re looking at those rare situations where the genes really are life-threatening. If you have one of these genes, you’re likely going to die. And the work right now is focusing on that small set of conditions where that’s true.

Another one of the conditions that the National Academy of Sciences placed is that there be no alternatives. And for most couples who are considering having a child and where they carry one of these life-threatening genes, we have preimplantation genetic diagnosis, or PGD, which is a really good alternative. Since that’s a well-developed technology with a good safety record, that would be something that would be considered first.

It would only be for a really small number of couples who wanted to have a genetically-related child who were incapable of producing disease-free embryos that this kind of technology would make any sense. This isn’t about “designer babies.” This is about offering a very small number of couples their only chance to have a baby that is genetically connected to them that doesn’t have a lethal condition.

GAZETTE: Is this analogous to the ethical concerns raised with in vitro fertilization back when that infertility treatment first arose? Is this the beginning of a societal discussion that we need to have?

TRUOG: Yes, I think that’s actually a very good analogy. There were many concerns raised around IVF and test-tube babies when that was developed, and I think we had a good societal discussion about it. While issues certainly remain, I think that has become a fairly accepted method for couples who can’t otherwise have a child to be able to have a genetically-related offspring.

GAZETTE: Are you troubled at all by the fact that, should a couple have a genetically engineered child, that change would then be passed on generation after generation?

TRUOG: It’s hard to imagine an objection to the fact that a non-diseased gene would be passed to the next generation. I think the concerns would be more about off-target changes in the person that may not even be recognized that could then be passed on to future generations. I think that this is a concern and I know that a lot of the research will focus very much on the rates of off-target effects and how to control them and how to assure that they’re within acceptable limits.

That being said, there’s — in nature — all sorts of alterations to the genome made from one generation to the next that we have no control over, we can’t predict. The fact that, in this case, we would be creating these alterations gives us a certain responsibility for monitoring them and being careful, but it’s not that unexpected changes in the genome don’t occur quite regularly.

GAZETTE: Do you have any particular concerns or were you troubled at all by this research?

TRUOG: I’m really pleased to see this proceeding in a very controlled, thoughtful way. I think my concerns would be twofold. One, that rogue scientists in another country would begin to develop this in ways that we would agree are not socially acceptable. For example, moving quickly into enhancement-type technologies. That’s another reason why we in the United States would be foolish to put our heads in the sand. We need to take a leadership role here and be a model for the rest of the world.

Number two is what happened with a lot of the stem cell research, which is where irresponsible clinicians hang out a shingle and make ridiculous and unsubstantiated claims about diseases that they can treat and, in a sense, lure vulnerable patients and perhaps couples into getting therapy that could potentially be quite dangerous.