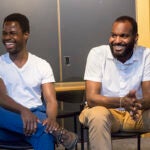 This year marked the 42nd anniversary of the event, featuring an afternoon of dining, dancing, and socializing with friends new and old.

Cambridge Mayor E. Denise Simmons welcomed guests and said the luncheon was one her favorite events. She thanked the University for its continued partnership in hosting the gathering.

Jean Ryde of Cambridge said she has attended the luncheon at least 15 times. She was the first to arrive at this year’s event and made sure to save seats for her friends.

“It’s such a nice event,” Ryde said. “We’re so well looked after when we’re here.”

“I love being in Cambridge. I love all of the diverse cultural places you can go here, and all the different people you meet,” she said. “And today is such a lovely day. A pleasant luncheon served by young students who are so accommodating. It really is a pleasure.”

A team of 50 students from the Mayor’s Summer Youth Employment Program in Cambridge, served lunch and assisted attendees.

“It’s important for the young people to interact with our senior citizens in a different capacity than they may be used to,” said George Hinds, director of Youth Employment for the city of Cambridge. “Many of them don’t get the chance to be with seniors that often, and this is a chance for them to do so in a relaxed, friendly environment. I also think it’s a nice opportunity for them to give back to their community.”

Elizabeth Scott of North Cambridge said she really enjoys seeing and catching up with old friends.

“It’s nice to be reunited with people you grew up with,” she said. “It’s also nice to see not only old friends, but to meet new ones as well.”

“It’s so fun, and wonderful to be outside on such a beautiful day in a beautiful place,” she said.

Edna Stant of North Cambridge, who has attended at least nine senior luncheons, said she’s enjoyed all of the past events, but her favorite memory was shaking the hand of Harvard President Drew Faust.

“I got to shake the hand of a woman president of Harvard,” she said. “That was really, really special.”

Harvard’s Vice President of Public Affairs and Communications Paul Andrew told the crowd the Cambridge Senior Luncheon is one of many occasions during the year where Cambridge residents and the Harvard community come together. “The partnership that we’ve developed over the years is an important one for the University, ensuring we stay connected to our neighbors and friends here in Cambridge,” he said.

“We look forward to welcoming you back to campus throughout the year,” he said.