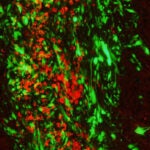 New approach may kill tumor cells in the brain

Researchers at Harvard Stem Cell Institute, Dana-Farber Cancer Institute, and Harvard Medical School have identified a previously unknown mechanism that plays an important role in the regeneration of the inner intestinal lining. Their findings provide new insights on how this tissue, which undergoes change on a daily basis, maintains itself.

The intestine is the most highly regenerative organ in the human body, regenerating its lining, called the epithelium, every five to seven days. Continual cell renewal allows the epithelium to withstand the constant wear and tear it suffers while breaking down food, absorbing nutrients, and eliminating waste.

In a Cell Stem Cell study, the researchers found that mature cells, instead of other stem cells, were responsible for replenishing the stem cell population in the intestinal crypts — cavities at the bottom of hair-like structures in the intestine — of mice.

“This is a very basic discovery that allows us to deeply understand how a tissue is organized,” said Ramesh Shivdasani, principal faculty member at the Harvard Stem Cell Institute, professor of medicine at the Dana-Farber Cancer Institute and at Harvard Medical School, and senior author of the study.

Over the past 10 years, scientists have thought that the extent to which the intestinal epithelium could regenerate relied on the presence of a second population of stem cells that remained dormant until needed. Instead, when working stem cells are depleted, some types of mature cells transform themselves into stem cells after undergoing a process called dedifferentiation, according to the new study.

“This process is possible because all the cells in our body have the same genetic code,” said Shivdasani, “but what makes each cell different is the parts of that genetic code that are actually active.”

For dedifferentiation to take place, a cell needs to rearrange the way its DNA is folded into chromatin within the nucleus. This would change which genes are active, something that is generally considered unlikely to happen.

However, after depleting the original stem cell population in mouse intestinal crypts, Shivdasani and his colleagues analyzed molecular markers and chromatin signatures unique to each cell type to determine which types of cells were present and in what quantities.

They found that two different types of cell populations changed as new stem cells appeared, indicating that these cells were dedifferentiating and becoming stem cells. All evidence suggests that the same mechanism likely occurs in humans.

“The intestine appears to have enormous plasticity,” said Shivdasani, “and in thousands of intestinal crypts we could watch the chromatin unfolding.”

This research sheds light on basic processes that occur deep in our tissues, allowing our bodies to deal with injury, and it may provide a foundation for identifying therapeutic targets in the future. Shivdasani points out, however, that it’s too early to understand how this knowledge may lead to treatments for specific diseases.

“We still don’t understand how the mature cells in the intestine know that the stem cells are missing,” said Shivdasani, but “we have shown that the chromatin barriers are readily reversible and that cells undergoing dedifferentiation can be captured and studied, which is an important start.”