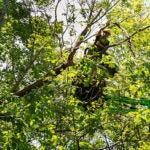 Paves the way for the future discovery of new physics

Physicists are capitalizing on a direct connection between the largest cosmic structures and the smallest known objects to use the universe as a “cosmological collider” and investigate new physics.

The 3-D map of galaxies throughout the cosmos and the leftover radiation from the Big Bang — called the cosmic microwave background (CMB) — are the largest structures in the universe that astrophysicists observe using telescopes. Subatomic elementary particles, on the other hand, are the smallest known objects in the universe that particle physicists study using particle colliders.

A team, including Xingang Chen of the Harvard-Smithsonian Center for Astrophysics (CfA), Yi Wang from the Hong Kong University of Science and Technology (HKUST), and Zhong-Zhi Xianyu from the Center for Mathematical Sciences and Applications at Harvard, has used these extremes of size to probe fundamental physics in an innovative way. They have shown how the properties of the elementary particles (the building blocks of matter) in the Standard Model of particle physics may be inferred by studying the largest cosmic structures. This connection is made through a process called cosmic inflation.

The team showed what the mass spectrum of the Standard Model would look like for different inflation models. They also showed how this mass spectrum is imprinted in the appearance of the large-scale structure of our universe. This study paves the way for the future discovery of new physics.

Cosmic inflation is the most widely accepted theoretical scenario to explain what preceded the Big Bang. This theory predicts that the size of the universe expanded at an extraordinary and accelerating rate in the first fleeting fraction of a second after the universe was created. It was a highly energetic event, during which all particles in the universe were created and interacted with each other. This is similar to the environment physicists try to create in ground-based colliders, with the exception that its energy can be 10 billion times larger than any colliders that humans can build.

Inflation was followed by the Big Bang, where the cosmos continued to expand for more than 13 billion years, but the expansion rate slowed down with time. Microscopic structures created in these energetic events got stretched across the universe, resulting in regions that were slightly denser or less dense than surrounding areas in the otherwise very homogeneous early universe. As the universe evolved, the denser regions attracted more and more matter due to gravity. Eventually, the initial microscopic structures seeded the large-scale structure of our universe, and determined the locations of galaxies throughout the cosmos.

“Several years ago, Yi Wang and I, Nima Arkani-Hamed and Juan Maldacena from the Institute of Advanced Study, and several other groups, discovered that the results of this cosmological collider are encoded in the statistics of the initial microscopic structures. As time passes, they become imprinted in the statistics of the spatial distribution of the universe’s contents, such as galaxies and the cosmic microwave background, that we observe today,” said Xingang Chen. “By studying the properties of these statistics we can learn more about the properties of elementary particles.”

As in ground-based colliders, before scientists explore new physics, it is crucial to understand the behavior of known fundamental particles in this cosmological collider, as described by the Standard Model of particle physics.

“The relative number of fundamental particles that have different masses — what we call the mass spectrum — in the Standard Model has a special pattern, which can be viewed as the fingerprint of the Standard Model,” explained Zhong-Zhi Xiangyu. “However, this fingerprint changes as the environment changes, and would have looked very different at the time of inflation from how it looks now.”

The team showed what the mass spectrum of the Standard Model would look like for different inflation models. They also showed how this mass spectrum is imprinted in the appearance of the large-scale structure of our universe. This study paves the way for the future discovery of new physics.

“The ongoing observations of the CMB and large-scale structure have achieved impressive precision from which valuable information about the initial microscopic structures can be extracted,” said Yi Wang. “In this cosmological collider, any observational signal that deviates from that expected for particles in the Standard Model would then be a sign of new physics.”

The current research is only a small step towards an exciting era when precision cosmology will show its full power.

“If we are lucky enough to observe these imprints, we would not only be able to study particle physics and fundamental principles in the early universe, but also better understand cosmic inflation itself. In this regard, there are still a whole universe of mysteries to be explored,” said Xianyu.

The research is detailed in a paper published in the journal Physical Review Letters on June 29.