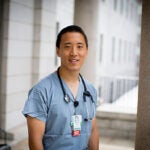 Terence Capellini, an associate professor of human evolutionary biology, is co-author of new research revealing a genetic “switch” that changes the activity of a key skeletal gene related to height, and pinpoints a variant in the switch that favors shortness and is far more prevalent among Eurasian populations than expected.

The study, described in a July 3 paper in Nature Genetics, also points to a surprising link between the sequence that favors shortness and an increased risk of osteoarthritis.

“There are a couple [of] aspects of this study that are interesting,” Capellini said. “One is that these genetic variants are occurring in noncoding sequences, so while genes are important, this shows that the genetic machinery around a gene can have a dramatic impact on how it works. But another interesting finding is that while evolution has increased the frequency of a variant that leads to decreased height, because of linked mutations, there is also an increased risk of osteoarthritis.”

From the outset, the goal of Capellini and his colleagues wasn’t to understand that link, but simply to better understand the genetics behind height variation.

To do so, the team from Harvard, Stanford, and the University of Waterloo in Ontario, Canada, combined the power of developmental biology, evolutionary genomics, and bioinformatics. The gene they chose to focus on, GDF5, has been linked repeatedly to height variation in genome-wide association studies.

“This type of study has been done on upwards of 250,000 people,” Capellini said. “When you look at the results of these studies, this gene comes up again and again, and when you zoom in on the GDF5 region there are a lot of genetic variants that are also associated with height variation.”

Essentially, Capellini said, those variations — found in the noncoding regions around the gene — can alter the activity of the gene in various areas in the body if they occur in specific genetic switches.

“If you want to influence height, one place you want to turn on the gene is in the growth plates of bones,” Capellini said. “But the reality is that, for all the height studies that have been done, no one really knows the switches, let alone which one in the GDF5 region contains the actual DNA variant that causes the change in height.”

To find it, the researchers attached a blue-producing reporter gene to each potential switch, and then tracked where the color was expressed in mouse embryos. What they found, he said, was a sequence that controls the activity of the gene in the growth plates, and, more importantly, a single DNA base change in the switch that influences its activity and height variation.

When Capellini and colleagues deleted the GDF5 growth plate switch from mice, their bones became shorter. This was in line with what the researchers saw when testing the human short height variant. Interestingly, they also saw that the femoral neck — the connection between the femur and the femoral head — grew shorter as well.

Other tests showed that the variant in favor of shorter height is prevalent among European and Asian populations, but rarely seen among African populations. Capellini and his colleagues suggest that this may be due to several factors:

“We argue that shorter height may have been advantageous in the past … because if you were living in a colder climate, having a short, stocky body may actually help you survive,” he said. “When you look at animals that reside in the Arctic, they tend to have shorter appendages to reduce the risk of frostbite and to maintain body heat.”

However, given the effect of the switch on femoral neck length, Capellini and Stanford’s David Kingsley also suggest, “If you’re tall and you have a long femoral neck, you’re at higher risk for hip fracture … So the thinking is that a shorter femoral neck might also have been a protective mechanism that’s brought this sequence to very high frequency in some populations.”

“It’s a very interesting situation, because favorable selection during human history means the variant we are studying is now present in literally billions of people,” said Kingsley, a professor of developmental biology and co-leader of the study.

The growth switch wasn’t the only one Capellini, Kingsley, and colleagues found.

“The variant that decreases height is lowering the activity of GDF5 in the growth plates, but there are lots of other mutations that are physically linked to it,” Capellini said. “A few others occur in different switches we found, each of which turn GDF5 on in the joints, and these mutations are associated with hip and knee osteoarthritis risk, and likely lower GDF5 activity in the joints.”

While the study offers new insight into the roles of noncoding DNA and the complex relationship between height and arthritis, Capellini stressed that GDF5 is only one gene of many that play a role in height, and that more work needs to be done to get a fuller picture.

“We know the genetics of height and arthritis are complex, with potentially thousands of genes involved,” he said. “This makes us appreciate that biology is highly complex and we need to tease out more of these relationships to really get a sense of how one feature may be associated with another.”

The research was supported with funding from the Natural Sciences and Engineering Research Council of Canada, the Arthritis Foundation, the National Institutes of Health, the William F. Milton Fund of Harvard, the China Scholarship Council, and the Jason S. Bailey Fund of Harvard.